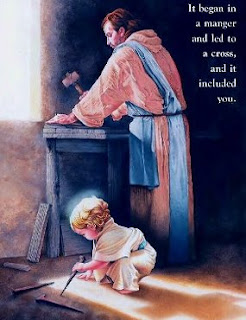 I was getting a lesson together for Sunday & centering it around Father's Day. Looking through the Bible, it made me think of Joseph. Why is it the Bible doesnt say a lot about him? He's such a mystery & yet, he had to be such a part of Jesus' life. After all, its because he was the husband of Mary (Matthew 1:16) that put Jesus in the lineage of King David - but we dont know if he was old/young, had been married before, had children from previous marriages, or his age when he died - all things that people speculate.

There are a few things that we know for sure. Being the parents, Joseph had to be a Spiritual influence on Jesus teaching him the laws they followed. You can even see in scripture where Joseph followed the laws of Purification & the Feast of the Passover. I wonder when it hit Joseph that Jesus had more knowledge than he could ever teach?

And we know that Joseph was a carpenter. Looking at some research - at that time, Carpentry was probably a high profile career. It was a job that was in demand. It wasn't like people could run down to the store & pick out a choice of tables & chairs or furniture. These were hand made items that took time & work. Plus, they probably made farm equipment (like yokes made to plant seeds) or used soft wood to make bowls or even chests people used to store things. Plus, I learned that in that day, the carpenters were responsible for the forests & the trees. They would plant seeds for the trees that they would take - how awesome is that! Also - think of the mind of a carpenter - they would have to have a designer or architect sort of mind - which shows that Joseph had to be a very intelligent man. So the images that we see with Joseph & Jesus working in a shop, staying secluded - probably isn't the case. They were probably out visiting people, seeing what needed to be made, working in the forest to maintain the lumber - out constantly visiting & tending to what people needed. Couldnt that be an awesome influence on Jesus?

And it was funny - I never noticed it before - but I read where Jesus was talking about some of the parables he used - one being the speck in your brothers eye when you have a log in your own......do you think working with a carpenter as his father could have influenced that parable? Something that Jesus understood? Of course, there was a bigger message there - but could Joseph had influenced him more than we know? And even the parable of building a house on solid foundation instead of sand? Yes - we get the deeper meaning in that as well - but with his earthly father doing construction out of wood - another influence?

We may not know much about Joseph - but he was a big part of Jesus' life - he must have been a pretty special man!