I was watching the lecture that Randy Pausch had given on Achieving your Childhood Dreams. You've probably heard about this man - he's dying of pancreatic cancer & wanted to embrace the last bit of life he has & is doing an amazing job of it. His view on life is just so inspiring. But he said something that in an interview that really struck me. Someone asked him if he could give any advice to his baby daughter when she grew up, what would it be. He said, "Dont listen to anything anyone tells you - just watch their actions" - he went on to talk about this in a "dating" sense for her when she was older & it made so much sense! People can tell you anything they want but how they treat you or others is really so much more telling - isn't it? Someone can say they'll be there for you - but if they're not when you need them the most - doesnt that say more of who they are? Or someone can tell you that they'll change - but if they dont change in their actions - can you see more of the truth in that?

Then it made me think - lets take the words out of the Bible & just watch it - sort of making the Bible into a movie with the sound on mute. What would we see from Jesus? Would we still see the man we know about without words?

I sat & visualized the difference scenes - of a boy standing in a temple with respected leaders watching him with awe & respect.

Of a man walking 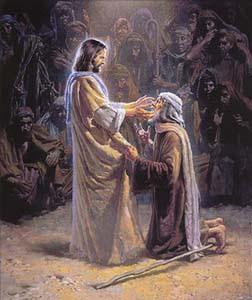 Of a man who stood before a grave & had a friend walk out of it, shedding his burial clothes

Of a man who was beaten, & cruicified & died on a cross

Then of a man who was whole again - who we saw being put in a grave, now walking & talking with the others - who had rose from the dead!

Of a man who ascended into Heaven while others looked up at Him in reverence.

Jesus showed in His actions so much more than I think we can imagine. Then add the words - WOW! But I think its safe to say that his actions spoke louder than words!
Now - for us - what do our actions say? Do we say we're a Christian or a Christ Follower? But if we turned the mute button on our lives - would others still see us as Christians?