Man oh man - did I have some ups & downs in my knitting last night! I have been working on my "Easter wrap" since April. The intent was to be done by Easter, but I should have known better - Easter was early & with all the projects I have going on at once, it was not going to get done. So I have changed the name to "Spring Wrap" - even though its now 90 degrees & summer is just around the corner.......the name for it now is just "my pretty wrap".....


So I was excited because I was finishing up my last skein - the end of the project was near. I was on a mission & even though it was getting late, I was determined to finish it! Checked out my yarn - had just enough to do the cast off row & it was done! Yes! Pulled the knot, cut the yarn & then took to to the mirror to see all the beauty that was knitting! But WAIT! What was this? It was too short!!! HUH??? It barely came around my shoulders & touched my elbows - too short for me. I just stared! Why didn't I wrap it around while it was on the needles? I just had too much confidence that it was finished like I wanted it - just goes to prove that sometimes when we are confident in something - we can still be wrong!


So I had things running through my mind - I'll just give it away to someone else or I'll just toss it in my "whatever" pile & then I was just angry - darn it - this has been a lot of work! So I go back to look at the pattern & guess what I found - ONE MORE SKEIN!!!! Where did it come from? I could have sworn I was on the last skein, but there it was, right under the pattern, tucked away! So where I thought I was done - I still had a few more rows to add on.


It was late, but I was determined to get started on this so I just wouldnt put it to the side. I ended up snipping the end & putting it back on the needles. Here's my picture of my wrap getting put back onto the needles that were already so proudly stored away because I was finished! Let me tell you - it was a late night! 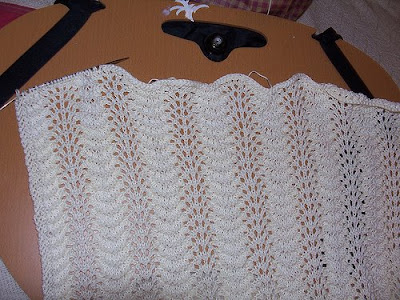 SOOO - one more skein to go! And this time, I'll be wrapping it around to see if its at a desired length before I cast off to see if I need to go buy another skein - or to see if another skein magically pops into my bag again! Oh, we just learn something with every project, dont we?