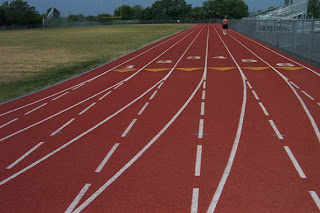 I had to get up this morning & take two of the dogs to the groomers (pictures to come!) - & it finally feels like Spring!!! Its warm, the sun is shining, it feels wonderful! So I headed to the local school's running track. The Mini Marathon is 7 weeks away... GASP!!!!

So I'm on the track all by myself for about the first half hour - enjoying the jog, moving along! Then a guy comes & stretches & gets on the track as well. He came on the track exactly half way around from me... so the chase was on... was I going to lap him, or was he going to lap me?

Dang, this dude was TALL & his stride was long. He was just walking while I was alternating between jogging & walking & next thing I knew - he was behind me.

It was funny because I couldnt see him any longer - but I KNEW he was behind me. It was such a weird feeling. Then out of the corner of my eye, I could see his shadow coming up & then, he was next to me & was very friendly.... asked how I was doing - & then, he was ahead of me.

Then I thought, OK - my turn, I'm keeping up with him & I'll pass him! So then, I felt like I was chasing him! But ding dang it (that's for you Mickey!), dude was half way around from me again & I thought, he's going to catch me again.

BAM - then it hit me... God just showed me how this relates to us!!!! How we know the devil is out there chasing us... we keep our eye on him but he still sneaks up behind us where we dont even see him anymore - we feel it, we know it, but he's out of our eye sight... & then he gets us! UGH!

But the cool thing, when we "repent", we get to chase him! We get to stay on his guard & say, NO YOU WONT CATCH ME AGAIN!!!! & you stay on top of things... but just like on this track, you get tired & slow again & he doesnt EVER give up, so he gets behind you again, making the chase after you again!!!!

Its a never ending process! We have to stay in the position to be the one chasing after the devil - have him on the run! Have him afraid of us on his tail! Make him sweat that he isnt going to ever make it behind us again.....

The thing is too - how do you keep up? You have to become stronger!! A few weeks ago, I'd never made 5 miles... but I did it today - but I'm planning on getting to 13 miles for this marathon! Its about building strength!

May we get stronger every day in Christ that Satan NEVER gets the chance to get behind us anymore! It's all about the race!