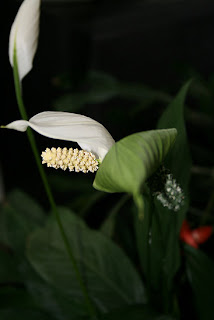 It just seems to be around alot lately - & of course, it is.

The one thing about meeting blog buddies is you get involved in their lives - & even lately, it seems there has been alot of death in that world. I've read about father-in-law's passing away with great pictures of them with their grandchildren. There is a husband who have passed away who was in his early 30's & had a rare form of cancer that took him from his two young children. There is the death of a baby that passed away two weeks before its due date. There was the story of Tuesday, a young girl that fought so hard & lost her battle.

Then, this week, we got a call at work.... I am a bookkeeper at a courier service & one of the couriers was found slumped over his steering wheel & had died of a massive heart attack. This man has been around for years - & such a nice guy...in a blink, he was gone.

And then this week, we lost a dear member of our church family. This man was such a influence in our church community & just went above & beyond for anything & anyone.

Two of his granddaughters are in our youth small group & talking with them - that's where it breaks my heart.... they had never lost anyone close to them & let me tell you - this family is like a TV family - one of those ones that make you sick because they are so close - they do exist! And this family is so strongly centered around Christ - there is NO DOUBTS that this man is walking with Christ right now... its just always so hard for those left behind - isn't it?

These girls ask such deep questions & they ultimately know the truth, but I think everyone needs to be reminded that yes, our bodies are frail - they weren't designed to last this side of eternity - but our souls were! And one day, we will get to be together again for eternity, worshipping our awesome Heavenly Father...... but how hard those days can be until we get there.