It was Spring Break around here for us. Now, while I didnt get off work & had a normal DAY schedule - my nights were freed up. Usually, I'm running to meetings, youth events, Bible studies - lots of stuff always during the evening. I only had one quick event Wednesday, but the other days - FREE!

I got the new "Kraft Food & Family" magazine - anyone else get it? I love it - its quarterly, & its FREE! I scanned through - found some ideas - actually wrote down ingredients that I needed & went to the grocery on Monday. Now, remember - I dont do this..... it felt so productive to me!

The first night - I made "Cheeseburger Joes" .... mmmm... it was like a home made sloppy joe thing with BBQ sauce & extras added in. It was soooo good - but all the BBQ sauce gave Ricky reflux so he enjoyed it while he ate it, but that night & the next day - not soo much!

Then, I made something called "Mac Chicken Cacciatore"... SO simple & so yummy! Ricky is so weird about cheese & it calls for a Mac & Cheese part of it - so I ended up making him a side of something different. Luckily for me - I got to chow down & even had extras for lunch the next day!

Then last night, I made the Piece-de-resist-ance! (Is that how you say it?) In my world - I can say, I made the Mac-Daddy Dinner!!! It was called "Weekend Lasagna Toss"... Oh my word... I feel like a true Rachel Ray when I say it was YUM-O!!!! And it as so simple!

Here is where Sydney sits while I cook... not fun since she's right in the line of the sink & the oven... she's prime for any droppings of anything. I make myself a gymnist straddling over her & balancing on one leg.... doesnt it look like she's getting ready to say something? 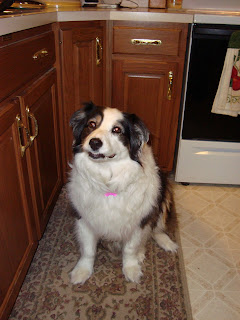 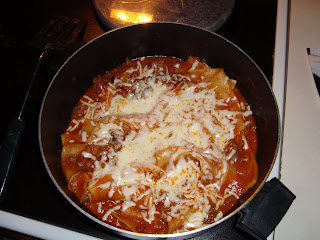 After my meal - we got to see Isaac on our Xbox live... I cried like a baby... he's getting so big! We havent got to see him walk like he does now until last night... I just teared up!!! WOW - its amazing how big he's getting & we're missing it... sigh... He was confused how we were waving to him on the TV. I told Julie that when he watches Elmo now, he's going to think "Is he looking at me like those other people on TV?"

But after a night of a big meal & seeing his grandson - this is the after effects... Ricky knows how to PARTY on a Friday night! Bruno was happy... any reason to snuggle! 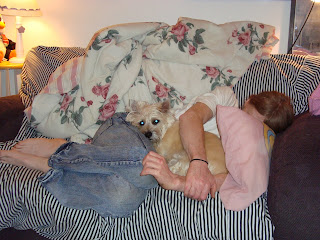 Hope you all are having a great weekend!