Dancing with the Stars!!!

Its Monday - its 8:00... and its LLLLLIIIIIIVVVVVEEEEE!!! Time to see what this week holds!
Gilles is the dreaded stair slipper this week! Every week someone is sliding... I'm waiting for a BIG FALL before the end of the season! 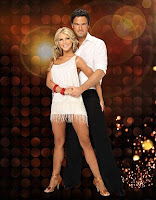 #3 - Holly Madison is up! Samba means shaking everything... Miss Playboy Bunny is having troubles in practice... Demitri is getting frustrated.... I think its the knee high socks that are getting to him.
She's a whole lot like Denise Richards... long pretty legs, but man, there is no movement in these ladies...She looked so scared too....
"That was rough to watch" -Carrie Ann
"That was like a match - hot at the top, cold at the bottom" -Len..... Scores 5, 6, 6
Ouch - Demitri didnt deny at all missing Jewel because Holly is a challenge... Tom just said it right "I'm sure Holly feels very reassured now".... OUCH!!!! 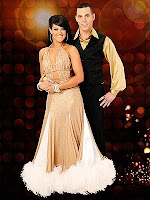 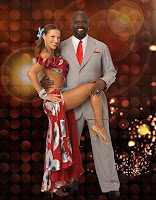 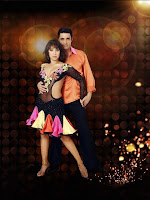 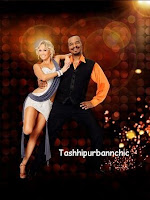 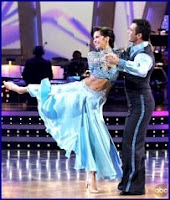 #10 - Melissa & Tony ...my girl & my guy....How nice was it for Tony to go with her to her office & pack up. But I have to ask, why did she have a huge football in her office? Oh, I have Beauty & the Beast everywhere in mine - I guess I cant judge. When Tony asked her if she's alright, made my heart sing. He's such a gentleman!
Just starting off, there is that smile! This girl looks like she's having the time of her life just being there! I just love watching the two of them.... love seeing how they disguise that tattoo on her back with bejweled things....
"....beautiful to look at - easy to love" - Bruno.... HA - take that Jason!
OK - Carrie Ann is criticizing... there is where I get ANGRY... just because they are good - she starts to judge them differently. She assumes if they are good they take to this dancing easily - the look on Melissa AND Tony's face when she said it was easy for her said it all.... the judges are not fair - I'm telling you - not fair!
Scores = 9, 9, 9.... cute - Lawrence has to take her golfing because of a bet! 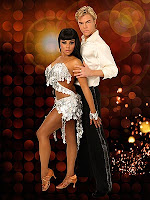 #11 - Lil Kim.... I just like hearing Len say "Lil".....she's got the Samba... I'm having faith in this girls hips!
She definitely has some hip action - that fringe was FLYING... she looked a little lost though & some steps missed... she's looking confused even now standing in front of the judges....
"....it wasn't perfect, but you sold it to me" - Bruno
"You have a bionic booty" - Len
Carrie Ann is driving me NUTS - "Yeah, you made some mistakes, but you went for it - great job"... but yet she gave Melissa criticism for little things... that's what shows they dont judge fair... this girl missed full steps...Oh, the angst of life - hehehe!!!
Love the dancers all were shaking their booty for her.... that was hilarious!
Scores = 8, 8, 9

#12 - Finally - Ty doing the Foxtrot... holding out hope since its not a Latin dance.
"Pretty cool, huh?".... how do you not just fall in love with this cowboy?
OH NO... the professional slipped...looked like there was another misstep... I think it was her dress... it didnt even stop Ty!!!! He just kept going... He was incredible.... He didnt even stumble when she tripped!
"... you're carving out of a stiff piece of wood, a mini Fred Astaire...." -Bruno
Scores = 8, 8, 7.....even with a fall!!! He said "We didnt practice that one".... he's so charming!
Another night of dance done..... If I had my choice - Denise would be GONE! But you know its going to be Steve O or Steve W. Both of them seem to be accident prone anyways... maybe its for the best.
Best of the night - Probably Shawn... she was just like Carrie Ann said - a Princess....
Did you watch - what did you think? And if you dont watch - why not? Doesnt it make you just want to dance? Gotta go do my salsa walk now to go take my bath!