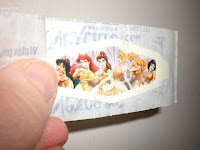 om the people I know! My most awesome friend, Lynn was up sending me a text of encouragement & prayer at 5:45 AM!!!! the day of the race! That was the coolest surprise! She also gave me the coolest gift afterwards - a card that when you opened sang "I'm every woman"!!!! & a pack of PRINCESS BAND AIDS for my Blisters... (I think Ricky used more of them then me... he looked so cute with Princess's on his feet!...sshhh - dont tell him I told you that!). I also was getting text from my hilarious friend, Erica who just kept telling me to RUN, RUN, RUN! My dad called Ricky to see if I was still alive - Ryan called to see if we were making it through - my friend Joe who was telling me DAYS before that I was going to live through it (I doubted it!) .... my husband who supported me in ways that I cant put into words....so much encouragement.

But it was so cool to see people on the side lines.... HUNDREDS of people who stood out there & would cheer you on! Stranger who have no idea who you are, standing there saying "Good job - you can do it - you're almost there - dont give up"... little kids with their hands out to give you a high five as you run by! It was amazing the encouragement that was out there!

There was one lady that stands out to me.... I was after that 10 miles "WALL" & was struggling... there was a lady who looked like she was in her 70's - she was sitting in a chair on the side of the road with another lady who looked about the same age. They were so cute with their little lawn chairs & sitting in the shade & just smiling at everyone as they trekked by.

I happened to look up at her - which if you remember, I was keeping my head down at this point because it was so discouraging seeing people running past me - but our eyes crossed. She smiled the biggest smile & then I looked away.... then I heard her voice LOUD & Clear... I looked back up as she was looking right at me & said "You can do this... you are going to make it... you are doing so good!".... I just looked right back at her & she smiled the biggest smile & gave me a thumbs up! I cant tell you the booster shot that gave me....

The power of encouragement....

I dont think we realize how important it is... I know you out there in Bloggy land are FULL of encouragement - I witnessed it & felt it...

But I think we need to be even more aware of it in our lives - our encouragement to strangers! Just like that woman who I'll never know her name - but I'll never forget her face... sometimes a stranger can be the boost you need - someone to tell you that you CAN do it!
I'm putting a challenge out there - Be a voice of encouragement to a stranger this week...

Be loud & bold in encouragement!!! It makes all the difference in the world!!!