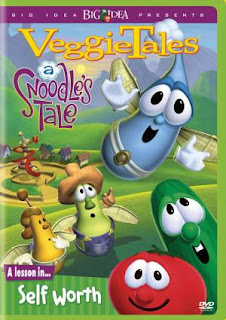 We've been doing a few weeks series of Veggie Tales for our youth... Yes, Veggie Tales + Youth! I personally - being more than a youth, ahem... older... have LOVED doing this. I did the message last night for the kids & the thing that I really notice is that you can find some deep, impacting message in every simple thing! After all, that's what most of my blog is about, I think - so when you get a cute little video full of adorable little creatures that focus on God & doing the right thing - how can you not pull together a meaningful message?

Anyhoo.... I did it off the video to the side - "A Snoodle's Tale"... how cute is that little Snoodle guy! It is only a 13 minute cartoon & done in a Dr. Suess rhyming theme. You will smile, make "aaahh" sounds & if you are REALLY a sap like me - when he meets his Creator - you could tear up! Yeah - I'll admit, I tear up at Veggie Tales! Hey - I cry at commercials too! I told you - total sap!

There is a point in this where the other Snoodles draw pictures of this little guys failures & where he messed up & they pile them in his back pack. After so long, they obviously get heavy & weigh him down. One point, he even falls on his face because of the weight! He gets so frustrated & upset that he decides to leave. The one thing that really stood out to me in this .... he left the Snoodles ... but he never once removed the things out of his pack!

He carried them with him.... he never lightened his load...

He may have left his neighbors - but did he really LEAVE them? Their harsh & cruel words were with him, getting heavier & heavier...

How many times do we listen to other's negative words & let them weigh us down? How often do we not let it go, but carry it around with us... for months - or even years?

Even worse - what about words we may put in our own back pack? I think those are the heaviest words?

In the end, the Creator took each picture out, lightened his load & threw them in a fire & showed the Snoodle the picture of what he will become - the potential - how He sees this little creature when everyone else saw failure.

A basic message that is full of encouragement.... How can you not love that?