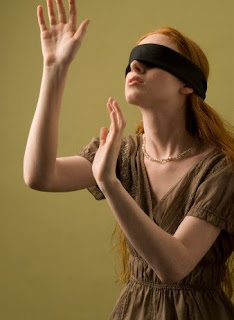 So what did I learn from this past week's lesson I taught to the Jr. High.... that we are LOST without Jesus!
It was a fun lesson! Literally had the kids bumping into each other!
I put blind folds on them, gave them each a number & WITHOUT talking, they had to get in order. Very interesting... some just stood there - others just sorta felt their way to a place - some just wandered around... the point? That the world without Jesus is just like that! Blind - not sure where to go - bouncing off each other - getting into a bigger mess!
For the Son of Man came to see & SAVE those who are LOST!!! -Luke 19:10
Then we did it again - this time, we had Joe & Ryan representing God & Satan - but the kids didnt know who was who... which one do you follow?
It was interesting because of the boys even said, "They sounded just alike - I didnt know which one to go with"... hmmm... such deep words & he didnt even realize what he said! How Satan disguises himself to look like light!
And then blind folds on AGAIN - this time - we let the kids talk - they could tell their numbers - they could "help" each other, all the while having Joe & Ryan talking to them - they STILL didnt know who was good & who was bad between the two!.... with the talking - it just caused MORE chaos... everyone talking over each other, yelling, giving orders when someone else was giving orders...
The perfect example of how its not the best thing to listen to others who are LOST as well... how can someone who cant see tell you where to go?
Finally, we told the kids - Joe is God/ Ryan is Satan - & they listened... they knew the voice - they tuned in to what Joe said... even while the whole time Ryan is messing up what Joe is doing - which was a whole OTHER thing to watch how frustrated Joe was getting (another lesson on how Satan keeps screwing things up!)....
"...his sheep follow him because they know his voice. But they will never follow a stranger; in fact, they will run away from him because they do not recognize a stranger's voice" -John 10:4-5
While this was a fun lesson... I pray the point was put in their little hearts... The world is full of lost souls... Praying everyone hears God's voice to lead them out of the darkness!