You can ask my parents... I didnt need to be spanked or grounded when I did anything wrong. How was the way to get through to me? Tell me that I disappointed them. I brought home a "B" one time on my report card & thought they were going to be so disappointed, I made myself sick! They obviously werent disappointed or troubled at all about that - but the IDEA that they COULD be disappointed bothered the fire out of me!!! I'd almost rather get a spanking that would blister my butt then feel like I disappointed them.

Then, I saw the interview last night with Kayne West & Jay Leno. 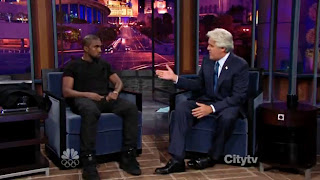 Yeah, we all have heard what Kayne West did. And sorry, I dont think his excuse of "I didnt really think it was that big of a deal until she didnt finish her speech" was much of an "excuse"... what did he THINK was going to happen? That Taylor Swift would say, "Thank you so much for your thoughts. Now, let me finish my speech...."... dont think so...
But what struck me was when Jay Leno brought up Kayne's mother. Kayne obviously adored his mother. She passed away about a year ago & you really felt for this man because you know how much he loved her. Jay asked "What do you think your mother would say about this situation if she were still here".... he visually changed. His lip almost quivered & he just kept his head down. It was a different Kayne.
I instantly knew what he was feeling... he didnt want to disappoint his mother.
Then the feeling that hit me right after.... what would this world look like if we thought about disappointing our Heavenly Father? If we thought of our actions & how God looks down on them.... would we act differently?
Parents DO get disappointed, but doesnt mean they dont love any different... & God is the same way, in an even BIGGER capacity that we cant imagine...
But I want to live a life that tries not to disappointment my Father - my Heavenly Father.....