Hold On... I have to finish this row!

Sunday, our youth minister was leading the Sr. High class on just two versese in the Bible.

"Going on from there, he saw two other brokers, James son of Zebedee & his brother John. They were in a boat with their father Zebedee, preparing their nets. Jesus called them & immediately they left the boat & their father & followed him" -Matthew 4:21-22

The message was a great one because it was a possible view from Zebedee, the father... his sons left him behind. Why didnt he go with his sons? Did Jesus not call for him? Did he not want to go because he was stubborn & older & set in his ways? Did he just not care? What left him behind in the boat?

But the word that stuck out to me was IMMEDIATELY... they immediately left everything - no questions asked... I brought that point out to the class - what is it that holds us back? What is it that wont allow us to follow Christ now - from a youth's persective, its sometimes "I can do it later - I'm young - I've got plenty of time" ... "God will ask too much of me, I dont want to give up my partying life now".... "I am in the 'cool click' at school - I cant give that up right now".... nothing stopped these two brothers... 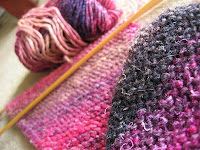 I had a student come up to me after class though & said, "When you were talking about that, all I could envision was you sitting with your knitting saying "Hold on Jesus - I have to finish this row".... Oh snap!

If you are a knitter - you've said that line "Hold on - I have to finish this row"... they even have bracelets that say that!!! There is nothing worse then being in a middle of a row & loosing your place... or so I thought... that amazing young man who said that to me brought up a great point to me ... sometimes its even more the LITTLE things that hold us back from IMMEDIATELY doing something for Christ - following Him, His ways....

May I have nothing in my life that holds me back from IMMEDIATELY following Christ or His ways!!!!