The muppets, some slips & the BAAAZZZZZ

Before we even get started... the MAN is in the house... Baaaaazzzzz... the maker of Moulin Rouge & Strictly Ballroom AND Romeo & Juliet... love this dude! 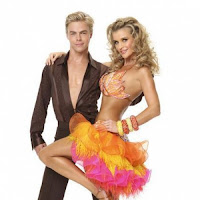 We get started with Joanna & Derek - I still dont dig this girl. Cant help it. And WHO in the heck decided she needed to look like Rapuntzel tonight? That was some massive hair....

Natalie & Alec - the Million Dollar Mermaid! This girl, I think could be the diamond in the rough. She was so elegant & I thought she did a great job. Of course, judges had to pick on the one thing she mentioned in her piece - that she holds her breath. Would they really have known that if she didnt say anything about it? hmmm...

Chuck & Anna - SCARY... only word I can think of... dude looked like he would KILL you if you said anything bad about his dancing... so moving on....

Melissa & Mark - love the polka dot dress & the shoes. Jive was just a little too much for her little Sabrina the teenage witch feet.... they needed some magic put on them.

Michael Irvin & Anna - He definitely has improved his dancing. But no wonder - the man is working like 20 hours a day & says mantras of "I know pain".... that makes dancing sound like SOOO much fun

Debbie Mazar & Maks - this is why I'm going to like this couple - she's already telling Maks to quite talking to her like an idiot. She's going to be a good equal for him. And this couple is pretty darn smart! Using Baz's own soundtrack from Moulin Rouge. I'd choose them to win just for this dance with this song alone! ... who says I'm not easily swayed.

Louie Vito & Chelsea - again - his smile is going to pull him through the competition... not his dancing... but it IS just a darn cute smile!

Aaron Carter & Karina - Who picked that music? The Muppet Show Theme? Seriously? All the music out there in the world & you pick the theme to the Muppet Show? weird.... I will give it to Aaron though - even wearing that hideous green suit - he did dance well!

Kelly Osbourne & Louie - I LOVE this girl. I love her face gives it all away - when she messes up & when she's happy. Poor thing obviously messed up - but I love that Tom whispered to her "Dont give up" & that her mom gave her the fists of "HANG IN THERE".... I just want to root for her!

Kathy Ireland & that hottie Tony - "Shall we Dance" from the King & I... weird costumes... stiff dancing... but smiles always on her face...you gotta like her regardless of how bad her dancing is.

Mark & Lacy - a stumble at the beginning - but the master martial artist recovered like the grasshopper he is! And Lacy just looked so cute in her 1940's look...

Mya & Dmitry - OK - besides Dmitry looking disturbing as a nerd with his FLOOD waters - not even HIGH waters - this dance was A-MAZ-ing!! She looks like a pro!

Tom Delay & Cheryl - Poor guy... I really like this guy. Seriously - compare him to the likes of George Hamilton & Jerry Springer & some of the older guys of the past seasons. This guy really has rhythm & can dance. But my heart broke for him at the end where he stumbled & almost dropped Cheryl. The look on his face just about killed me.... he looked so disappointed & like he let Cheryl down. It just made me sad..... I dont know why - but I like this guy!

Donnie Osmond & Kim - I've been waiting all night for him to dance!!!! And I wasnt disappointed... cant say anything bad about this guy!!!! Glad they saved him to the end...

So who do you like? And did you notice all the dances seemed WAY short tonight? Or is it just me? Thoughts? Who do you think is going tonight? I'm thinking Kathy... lets talk some dance!