Totally enjoyed a day off work
Ricky & I took a day off work yesterday & it was wonderful! We ended up sleeping in till 8 - or, at least, I did (you all know Ricky is still up at 5:30!) & then we had some breakfast, took it easy & then headed out for the afternoon. Nothing planned really except a 30% off at Kohl's! I think we spent close to 2 hrs there. I did an experiment of "Stacy & Clinton" style - I went & tried on things I normally wouldnt wear. Let's just say there is a reason why I dont normally wear those things! But I did end up with a beautiful pair of dress pants I wouldnt normally wear. Now - to find a top to go with it... ugh... a woman's job of shopping is never done - is it?
We then ventured for some lunch, & headed to Pet Smart to find some steps that can help Sydney. She's an Australian Shepherd & they are notorious for bad hips, & with her 10 yr old birthday in November, her hips are starting to kick in. She's not able to jump on the bed like she used to or get in the car like a puppy... so we found some incredible sturdy steps... now, just getting her to learn to take steps instead of jumping. 10 years of habit is going to be something to break.
Side news: I finished the cutest "Hermonine Hat" (Pictures to come) - I finally got to watch Mamma Mia (just joined Netflix & am loving the ease of getting movies) - our flying insects seem to be gone - got a birthday party to go to today for a special little boy!!! - & now, I gotta head out to the recycle center.
Let me share a few pics from last Saturday & the fall festival with the twins... 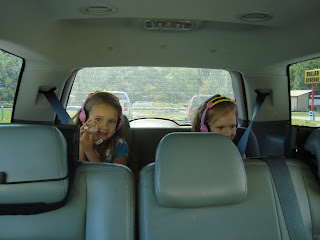 Heading out for the road trip...Sophia has my friend Chico with her - showing him love. Madi is into "Shrek" & nothing can distract her! 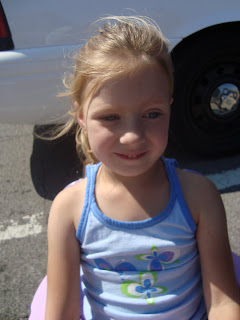 Madi waiting for the parade to start.... 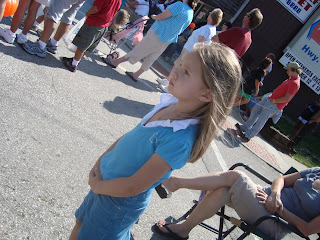 Sophia waiting patiently for the next float that is throwing out candy! Girlfriend went running after it & came home with a BAG FULL of it! 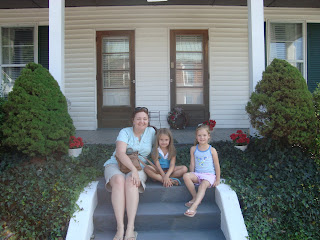 Me & the girls on the porch of my aunt & uncle.... they've since gone to be with Jesus, so its crazy to see the "next generation" sitting here... my brother & I spent many a Fall Festival on this front porch... 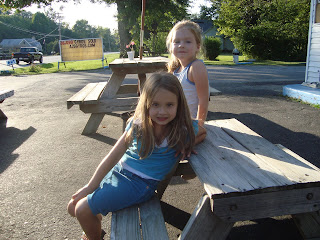 Stopped for Ice cream on the way home... little posers? 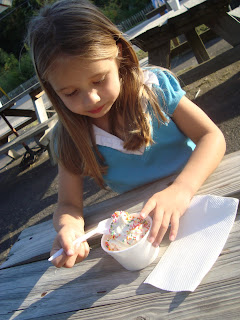 Its all about the Sprinkles!!!! It was hilarious! We were sitting there & a kid came up to the window & he was sporting the "style" of wearing the saggy pants - where his underwear - or pretty much his WHOLE BUTT, was showing. Sophia was sitting there eating her ice cream, looked up & saw it & just started laughing & said, "Look at his butt!"... I thought we were all going to die... needless to say - he pulled his pants up! 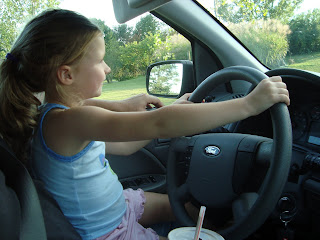 And yes, that is Madi... DRIVING!!! She's 4 yrs old & a pretty dang good driver! They have a very long drive way & she gets on daddy's lap - afterall, her feet cant reach the pedals - & she can take the curves & turns! By the end of the drive way, she's using only one hand with the other arm leaning on the window.... I was in awe!
Hope everyone has a great Saturday!!!