Now, you all know I cant just let the premiere of Dancing with the Stars go & not say anything about it... you know me better then that!

We kick it of with Aaron Carter & Karina - All I can think about are her pants! They are the same ones she wore in the Emmy's! At least get a different color! And why are the Backstreet Boys all there? Aaron wasnt IN the group - his brother was. Anything to get voters to vote. 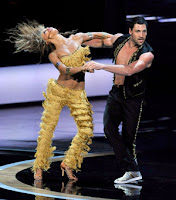 Chuck Liddell & Anna - Dont know who this guy is & I think I'm afraid of him. He just looks mean... & to be honest... Anna isnt a favorite of mine... I really dont know how long this guy will last.

Mark Dacascos & Lacy - I think he'll be the Gilles of the season. I remember him from "Double Dragon" with the dude from Party of Five... anyone else? "Kung Fu Fighting" for the song? Seriously? Original Much? But I did like the dance... but how are the judges going to yell at him for doing kung-fu moves to a song called Kung-Fu Fighting? Stupid judges....

Ashley Hamilton & Lady Legwarmer - I never knew how much his smile looked like his dad... didnt know he was a comedian... really? Nothing else much to say about him when it comes to dancing... Oh... painful!!!! My eyes...
Donny Osmond & Kim - This guy HAS to make it to the finals! I literally sat & clapped in my own room with no one around me when he danced... WHY? I dont know... but he made me so happy with his dancing! And the judges give him a 7-6-7???? HUH? They're going to pick on him! I've always loved Kim too so hoping this is her year!!!! ... and did anyone else see Jermaine Jackson sitting with Marie? I guess big families that were raised in entertainment stick together... 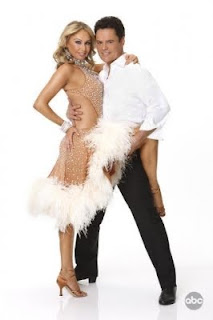 Louie Vito & Chelsea - another guy I never knew before. "Little Dancing Hobbit" - yeah, I think Bruno hit it on the head. This guy is TINY! I dont think he'll last long but he does have an infectious smile! But Chelsea also made it to the final four with Ty last year & he too had an infectious smile... so who knows.. maybe this will be the dark horse of the gang?

Michael Irvin & Anna #2 - First, I dont like this Anna either... HOW did she get voted in last year? I always said it was rigged. Second - OK, a football player with no feet that dont move well? Doesnt sound good for him.... But his competition with Jerry Rice is pretty funny.
Tom Delay & Cheryl - OK - I'm going to give it to the dude.... I think he did pretty darn good! The judges were harsh on him - but I really think he did better then Louie, Chuck & Michael... no doubt! I was really impressed... but I think they all want him to fail so badly that they'll keep giving him low marks... Go Mr. Political guy!!! (I know nothing about politics so I dont even know what he did... or still does???... )
Did you watch? What did you think? Who was your favorite guy? Mine is TOM BERGERON!!! That's one quick witted man... excited to spend another season with him!
Bring on the ladies... let's see how bad Macy Grey REALLY is!!!