It Friday... I'm headed to the dentist in 30 minutes... lets get into fragging & I'll tell you more....
*****
Nothing seems out of the ordinary - the day is going well... I just got done running 5 miles... just made a healthy dinner.  Waiting for the rest of supper to cook, I just took a hot dinner roll out of the oven & started to chomp it down.  Ricky was talking to me when I took that bite... & he saw my eyes buldge out of my head.  MY TOOTH ... I JUST FELT MY TOOTH... I didnt know which tooth or what happened - but I just felt a tooth in the middle of that dinner roll.  I just spit it all out, & there in my hand was a crown!!!
Luckily, its had a root canal & didnt hurt at all... but people telling me I may have to have it pulled just totally freaks me out... I dont do well with having teeth pulled.  Please Lord... PLEASE LORD... dont let it have to be pulled.  We'll see in 30 minutes!
*****
To add to my plight of broken teeth, lets also talk about broken knees.  I'm falling apart...I've decided.  The past few months, my knee cap feels like its falling asleep.  So I'm looking it up & talking to other runners.  Apparently, it could be a pinched nerve in my knee.  Makes me mad because I'm progressing so well on my running.  Doing 5 miles every other day... I cant stop now... But ever try to stand on a foot that's fallen asleep?  Know how weird that feels & how sometimes you cant even stand?  Yeah... have that feeling in your kneecap... sigh...
*****
When I woke up Wednesday - the first words I heard from Ricky were, "Do you know its only 9 months to Christmas?" ... goodness gracious... how his mind works.  But it did put a little bit of panic in me thinking, "We gotta start shopping NOW"
*****
I share a bathroom with 2 other women at work.  They've both had the stomach flu... I'm freaking out... you all know my fear (crazed fear) of germs.  I have been literally walking around with Lysol in my hands, spraying everywhere I go... I then realized at the end of the day that I was having the worst headaches in the world.  I may not get the stomach flu, but I think I've inhalled enough fumes that my brain may be right next to Charlie Sheen's....
*****
Did ya see the line up for Dancing with the Stars?  I keep hearing people say they're disappointed with it.  I have 2 words for that...GILLES MARINI ... no one knew who that guy was, except as "That naked guy from Sex & the City"... but then everyone loved him & was cheering him on in the end.  That's what is fun about the show, to me - people just dancing - dont even really need to know who they are.... the fringe just hypnotizes & you're loving the show all over again... it'll be a good year... if it involved dancing, it'll be good! :) 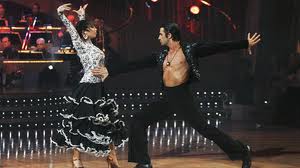 
*****
which leads me to the SPAT OF THE WEEK:  AMERICAN IDOL!!! I have a feeling this will be a recurring spat for the next 3 months.  Ricky's favorite is the Rocker, James Durbin.  Now, dont get me wrong. I like the guy too... but that screaming just GOT.ON.MY.NERVES during the try-outs.  I totally agree that he ROCKED it Tuesday... the screaming was appropriate.  It was a Judas Priest song for goodness sake - that's appropriate for rock screaming.  But Ricky was all in my face going "HA - told you he was good"... Dang dude... I agree!  I thought he did fantastic.. but Ricky must have kept hearing me say something like 'He just royally sucks"... which I didnt.  I just kept saying, "I am agreeing with you - he sounds great!"... it wasnt pretty... And then when my guy, Casey, came on, Ricky was just a poop head about him... if it comes down to a James - Casey Finale?  We may end up divorced...
*****
OK - I gotta jet... off to the dentist I go...Happy Friday all!!