I cant believe we're going into the 12th season...I have bought a new laptop computer holder, complete with a pull-out area for my mouse so that I can get comfy on the couch with this season.  So I'm kicked back, ready to take on this season, ready to see the players out of the gate... who has rhythm... who doesnt?  and most importantly - who's going to be the first this season to wear those fringe-flying-pants?  Let's find out... because we're LLIIIVVVEEEEE!!!!

8:03 - who dressed Brooke?  She has one huge flower on her hip that is bigger then her whole body...

8:05 - "As soon as I saw Mark, we had a connection" ... I would too... I love Mark!!!!  I see a potential love connection between these two... how cute would that be?  Mark with a Disney girl? Ahhh - I see blue birds flying around & deer walking through the studio ala Sleeping Beauty... 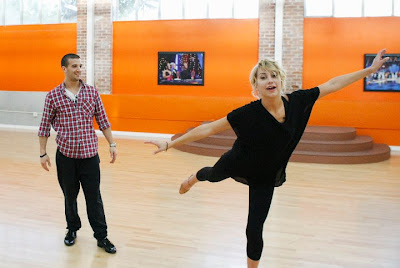 8:16 - did she just really ask Tony Dovoloni what his name is?  Has she never seen the show?  Who doesnt know Tony?

8:31 - "Who knew under the helmet was all THAT... that was the most sparkly cha-cha ... your smile just lights up the whole stage" -Carrie Ann
"You carry on the tradition of football dancers who can dance" -Len 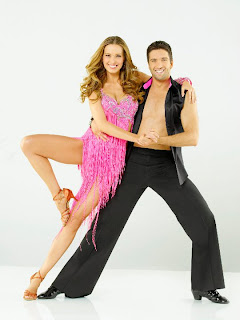 8:40 - getting the news of the tsunami in Japan.... "Its so hard to dance knowing people are suffering... I want to dedicate this dance to everyone suffering in Japan & to everyone who has been impacted by this tragedy"

8:48 "... son of one of the most infamous ballroom dancers since Kenny Main... Master P" -Tom ... oh my - Master P made Kate Gosslin look like she could host her own ballroom dancing classes...

8:50 -  "He's embarassed right now because he doesnt want to show his feminine side..he cant get past the part of not looking cool." -Chelsea

8:54 - Welcome back lady singer with the rhinestones in her hair & on her forehead...

9:04 - "You're obviously going to be a fan favorite.. you lit up the dance floor!  You had moments where you reminded me of Ben Vereen... But POSTURE, POSTURE, POSTURE" -Carrie Ann ...

9:07 - "I'm a reality star" - Kendra "I describe myself as a tomboy... but a sexy tomboy.  I'm ready to take all my years of club dancing & turn it into elegant, ballroom dancing" 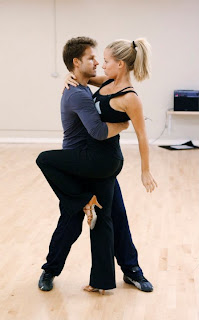 9:24 - dancing a fox trot to "Aint that a kick in the head"... how clever are these Dancing with the Star people?

9:25 - "I've got the feeling that you're a GREAT STONKING HIT" - Bruno (it really was pretty awesome)
"That was an amazing surprise" - Carrie Ann
"Best fox trot tonight" - Len

9:33 - you cant even hear the promo package because women are screaming in the audience... wow...

Question:  when did Kristie Alley get the title of "TV's most outrageous actress"?  What has she done that so crazy?  Seriously... I dont get this title they are giving her...Now say "outrageous" about Charlie Sheen or Lindsay Lohan, & I'm not even questioning it...

9:43 - "Dancing is like walking... except not at all" - Mike "Before I came in here, I was wondering if there was a talented dancer inside of me... the answer is no" 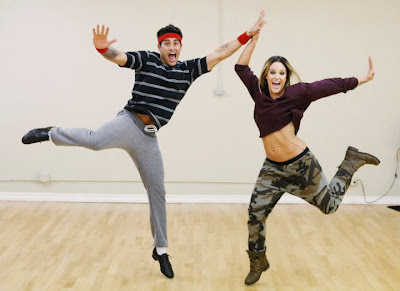 9:44 - bad dancing aside - all I can see is Lacy's hair.  Couldnt they have done something with those roots?  That's not a good look for her...

We're off to a new season... lots of good dancers this year!  I am excited about Kristie.  I do love a gal who is funny & says what she thinks.  I'm also excited to see Ralph do so well - but wonder what the Latin round is going to do for him.  And the unknowns?  Some good dancing going on!!!

What did you think?  Did you feel funny seeing Hef in the audience ALONG with Kendra's husband?  Did you love Carrie Ann's darker hair?  Who was your favorite?  Who are you rooting for?