The weekend that was 3 days long & 1 recovering husband

Anyone else totally confused what day it is?

I know its Tuesday, but coming back to work & trying to catch up a day, its completely going to FEEL like a Monday.

First, I wanted to give a quick update on Ricky - he's doing OK.  Healing. Not fast enough for his speed. I keep telling everyone I think this is going to be more mental for him than anything. The idea of him having to stay confined in a place, or something physical that keeps him from being on the go?  Pure torture for him.

He's still in pain - but getting better.  The worst part for him isn't so much the hernia as it is having a cough/cold WITH the hernia surgery.  He's been constantly fighting coughing & sneezing because doing so with that cut in this gut? Not fun.  Ain't no pillow big enough or strong enough to make it comfortable for him... or feel like he's not going to bust that 5 inch incision that is held together by glue ... {{{{shutter}}}}}

His swelling is starting to go down - his bruising is starting to turn his belly all sorts of fun colors - but he is able to get up & down out of bed easier... standing up straighter... but still wears out quickly.  He couldn't handle it any longer yesterday & we drove down to Starbucks & then he wanted to try Target.  Half way around the store, he was exhausted & in horrible pain again.... so he's very limited. That's for sure... but at least he's on the road to recovery.

Thanks everyone for all the messages & texts & questions on how he was doing. Truly means the world to us...

So it was a long weekend & I thought it would be a fun & different way to try & track it with numbers.... I am a number's kinda gal after all...  so here's a quick look at my long weekend.

(& I really did keep track of things - my little note pad sat on the kitchen table & I would write things down & put check marks... this was kinda fun actually)

2 - batches of cold brew I made

4 - walks Ricky took up & down the back yard 197 - walks Ricky took up & down the hallway, into the kitchen & back into the bedroom


37 - times I threw a frisbee for Harvey Dent

3 - Naps.  Didn't I just say how much I hated naps?  I just felt drained this weekend. I think all the down time of sitting around with Ricky did me in.

2 - Bible Journal pages I worked on.

2 - of those hours spent reading with a blanket over me! It was CHILLY outside Sunday. The air was so breezy & cool.

10 - flies going through our kitchen where I opened the back door & kitchen windows while it felt so cool out. 88 - pictures took of the fireworks with my camera

1 - Painted horse to celebrate the holiday 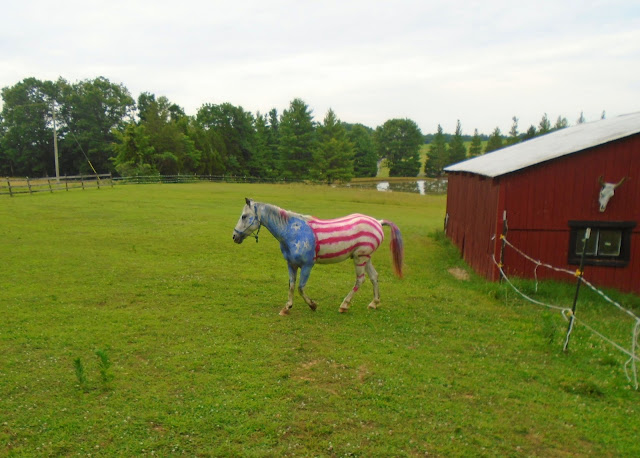 1 - workout.  I've really let my workouts go with Ricky's surgery on Thursday & taking care of him. I can feel the sloth kicking in too not working out.  Plus, my knee has been killing me so I've just not cared about working out - plus Ricky has been yelling at me to take care of my knee.  So, I only got in 1 workout & that was yesterday. I'm back in the game though... even with my bad knee.

Countless - the number of times I wish I could take away Ricky's pain.

So - there's a quick look at the weekend in numbers...

How was your 4th of July?