(Some of you may have seen this already - Blogger pulled a fast one on me & posted it early - but Steven Curtis Chapman took top priority - so I pushed this back... so if you DID see it before in Google Reader, just be a pal & act like this is the first time you're reading it....thankyouverymuch)

I read recently a blog buddies take on marriage... its right here on Amy's blog over at "Chapters" ... its really insightful...

She was talking about where someone told her that marriage "is like you are standing with the barrel of a loaded shotgun pointed at your forehead.  You're pointing one at him and he at you.  It all comes down to the fact that you believe the other one won't do it.  They won't pull the trigger."

So... I go to tell Ricky this anaology & said, "Listen to what I read today that I thought was so cool.  Someone said the idea of marriage is having a loaded shotgun & you both have it at each other's head....."

Ricky then cuts me off & says "And you're seeing who pulls the trigger first"...

Umm... honey... that's the OPPOSITE of what I was going to say...you're NOT supposed to pull the trigger. 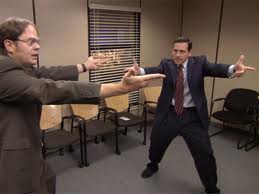 I'm hiding all the guns in the house....