Go Tell it on the Mountain...

We had to sing it Sunday & the whole time, I'm gritting my teeth while trying to get musical tone to come out.

I dont know what it is about that song.  Its upbeat, which I normally like... it just get on my nerves...

BUT, I will say, I told more then one person, "I hate that song, unless Jessica sings it"

Jessica is a woman (which feels funny to say because she was a teenager when I first met her, but is now a married woman) at our church who can SINGGGGG.... I mean SSSIIINNNNGGGGG... girl has some pipes on her!

Our area every year even has a local "American Idol" type of competition & she made it to the finals in the Louisville, Kentucky area... I'm telling you - amazing voice!

When she sings this song, it just has a different feel.  It has such soul - it totally makes me clap my hands, dance to the beat, smile & want to sing along. 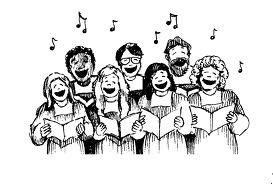 Well, Sunday, we had our yearly Christmas concert at church & we may be small, but we are mighty with talent.  So many singers who shared a solo ... they each just make me want to jump up & cheer for them - or ask for their autography - because they are ALL like stars!!!!
So Jessica is up... & she is singing "Go tell it on the Mountain"...

I had a unique spot.  I was up on stage, so I was behind her as she was singing.  I loved being there because I was able to look out & watch everyone's faces & reactions to all the singers.  When Jessica was up, it was even more precious...  Because out in the audience was her father.  Her mother was up on stage with the other singers so I couldnt see her - but I was in direct line with her dad.

And mercy me... her dad was BEAMING!!!!!!!!!!!  Just smiling & mouthing the words along with his daughter.  It was such a pride that he probably didnt even realize was shining off of him....I'm sure in his eyes, he didnt see his grown, married daughter, but the little girl he saw grow up in that church.

Driving home, I thought about that look he was giving his daughter... & I thought about God, OUR Heavenly Father.  Did he hear all of his children singing that night & was He just beaming?  Just shining with pride of all of us lifting up the name of Jesus & singing about the wonderful night He was born?

I dont know about you, but that just makes me want to sing more & more...

But Jessica can keep that song ... I'll go with another ditty ;)