1. July 20th marks the anniversary of the first time man stood on the moon. Flash forward 42 years to July 8, 2011 which marked the start of the final Space Shuttle mission. Should we continue to explore space? Should nations devote more or fewer of their resources to exploring space? Would you want to go into space if the opportunity arose?

I think it's so sad that it was the last Space Shuttle mission... I think its even sadder that I didnt even KNOW it was the last mission until a few months before it took off.  Thanks to a Blog-buddy who told me, I would have been clueless.  I think that's the problem - people just aren't aware of the space program anymore.  We need people up there - if only to destroy astroids if they're heading to earth!  I've seen enough movies to know that our lives could lay in the hands of astronauts... or oil diggers... (& you wonder how I didnt realize it was the last mission?)

For the record - you couldnt pay me enough to go to space.  I dont even like to get on a plane flying to Houston for 2 hours!  The only reason I do that is to see faces I love... aint no face in space good enough to get me up there!

2. What are three things in your freezer?

1.Cool whip - a life without cool whip is a sad life
2. Super Duper Massive Ice Pack - good for the ole' knee after rough runs
3. Meat - probably left over from when I used to eat meat... since I dont eat it anymore, I should probably think about throwing it out, but then I get sad of the poor cow's life wasted away in my freezer, so I'll just keep it in there in honor of Mr. Cow.

3. If you could see any band/artist perform live tonite who would it be? It has to be someone living-no Beatles, Elvis, etc.

Funny you should ask... because TONIGHT - I am going to see a band perform... 2 bands actually. 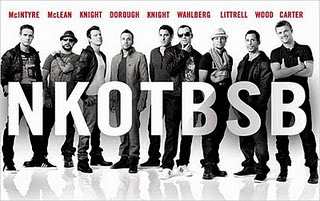 New Kids on the Block & the Backstreet Boys....
dont be jealous... I may inhale so much Aqua Net from all the people blowing back to the 80's that I could get brain damage.

4. Ice-cubed or crushed? Or are you one of those people who don't like ice?

my dad used to work at a place that made "tube ice" - it was the Da Bomb in the world of ice.  It was easy to crunch like "crushed" ice - wasnt as big as "ice cubed" ice - it was perfection... if frozen water could have a "perfection" about it

5. The owner of a small restaurant outside of Pittsburgh recently announced he was banning children under six, saying they regularly disrupted other customer's meals. You can read the story here in more detail but isn't this a perfect topic to discuss in our Wednesday Hodgepodge? Have at it friends...what are your thoughts

I think people are super-sensitive... but I think it depends on where you're going.  If you go to any everyday, ordinary place & you dont expect children to be there, then get over yourself.  Kids act out & it happens.  But if you are going to a five star place, then people with children who they know cant sit still for 5 minutes probably shouldnt take them there either... I guess its about respect for others really... Personally, I dont think I've ever had a child bother me in a restaurant - even when they're on the floor screaming.  I actually have wanted to join in with them before...

6. What was your first car? How did it come to be yours?

I have pictures I need to find.  It was actually my friends first car & she graduated to a better one.  I got it for the bargain price of  $500!!!  My parents theory was, "you're going to wreck your first car anyways so you're not getting a good one" ... for the record, I didnt wreck it - I didnt wreck until my 3rd car... so HA! :)

8. Insert your own random thought here

Chronic Dry Eyes really bite... you have no idea how painful & how miserable it really is :(  For someone who loves to read, someone who loves to check out computer, someone who likes not having pain in their eyes...  yeah, its something to get used to...my moan & groan of the day.Want to join along in the questions - click the picture above & answer away.  It really is cool to see what everyone thinks on the same topics.