I got tickets months ago & felt like it was going to be forever until the day of the concert... but it arrived.

My friend, Erica & I were so anxious to get to this concert.  I think I was excited to see Erica also see NKOTB with her own eyes.  She said it was a childhood dream of hers to see them... girlfriend will throw down with some NKOTB songs.

First though, we had to stop & get some grub to fuel for the night. 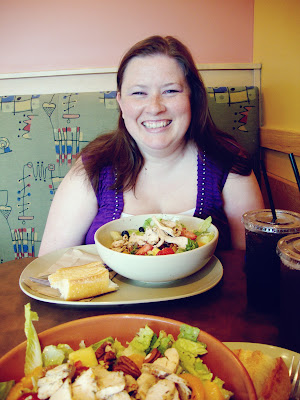 Since neither of our husbands are fans of Panera Bread ... WHAT?  I know!... we decided to go there & grab some good healthy food.  Look at this salad!  Isnt it amazing with all that fresh fruit? 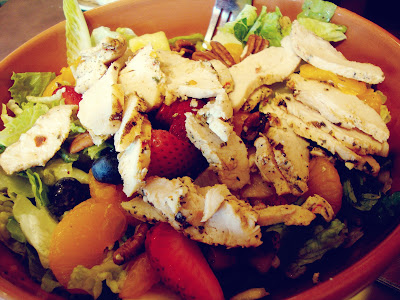 Then we head down to the KFC Yum! Center.  It was the first time I had been in there.  It was cool to see tons of women dressed in 80's wear all around.  If you look close in this picture, you can see a HUGE PINK Limo too... It was the ultimate girls night out!  It was funny too because there was a guy sitting on the side of the road playing his violin - I asked him if he could play any New Kids songs... he just started "plucking" the same strings over & over... Erica & I were like, "Um... ok... no" 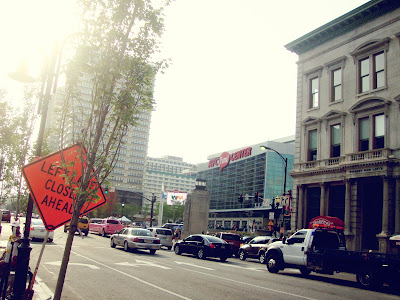 I didnt want to lug my big camera around so I just had my little point & shoot so my pictures werent the best, but that's OK - the memories are fantastic.

Some little new "boy band" opened the show... it was funny because everyone was just kinda laughing at them & I told Erica, 'Look, we're all laughing at these kids, but when these older men come on as a "boy band" we're going to be screaming like crazed girls" ... oh, the irony...

Then, the REAL opening act.... Matthew Morrison!!! ****SWOON**** I love me some Mr. Shue.  And he did some songs from Glee so I was about freaking out!  I was disappointed though because I so wanted him to sing "Over the Rainbow" - but he didnt... tear from this fan... but he still didnt disappoint. 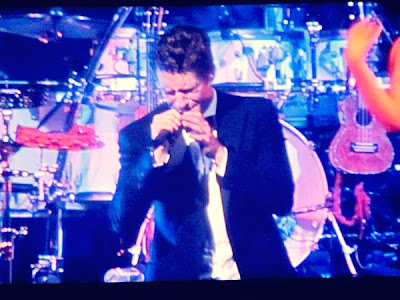 I had to laugh... & felt bad for him at the same time... He sang a song about how hard it is to get out of the spotlight of everyone thinking he's JUST "Mr. Shue" & not a real preformer who loves the stage & who loves to sing.  When he finished the song, someone yelled "WE LOVE YOU MR SHUE" .... um, yeah... that was the point he was trying to make.  It did make me chuckle though. 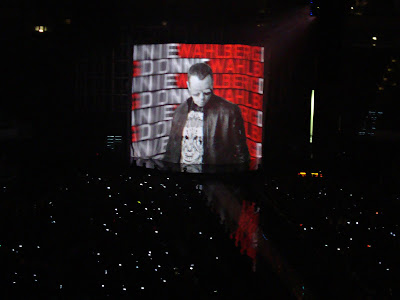 They flashed all the guys pictures on the stage... it was so cool... I could feel the time warp starting!  By the way - Donnie Walberg - how the heck does he still have those abs at his age?  My jaw literally dropped when he took off his shirt.  So did the guy next to me!... haha!!

Yes - there were tons of guys at the concert which shocked me - but when I saw this guy next to me, I thought, "he's going to be hating this" - but every time NKOTB was on stage, he was up, getting his GROOVE on.  I was laughing at certain dance moves he was doing.  I even tried to sneak a picture of him, but its too dark to see him.  He was hilarious!

But then they all came on stage... 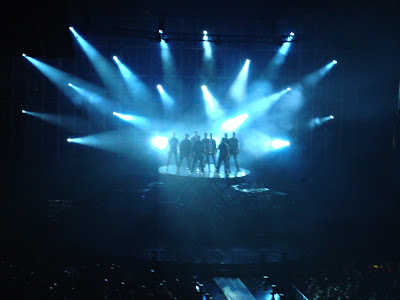 I just loved seeing Erica's face when they came out too!

The concert, if you get to go, is AMAZING!!! They took turns performing & it was such a good stage show! 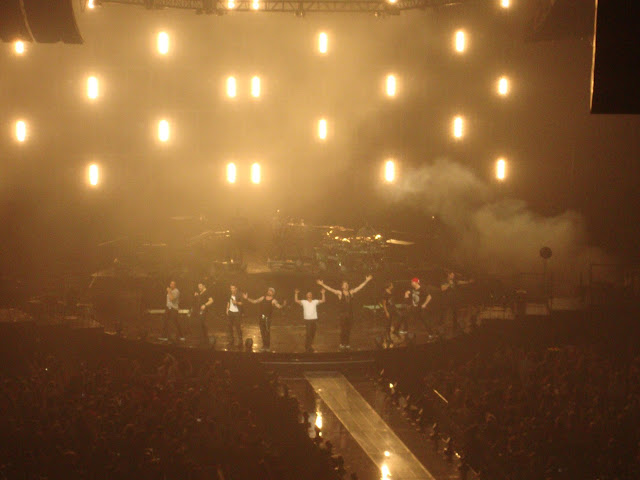 These were the 2nd highest tickets & they were still that far away?  Geez... but still better then the ones in the top tier section.  How they saw ANYTHING would have been a miracle... but I could see them all still dancing at the top .... I think you just had fun if you were in the building!  I did wish I brought my long lens & good camera in the end though! 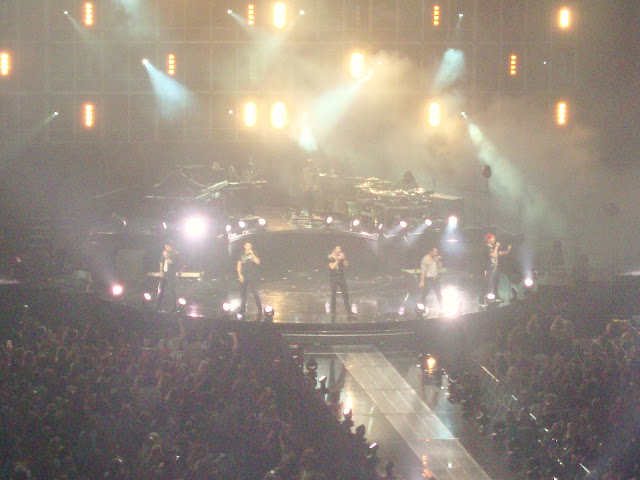 I was surprised how many of the Backstreet Boys songs I knew - & really liked... They were pretty awesome too.  It was funny to see them bring their wives & children up on stage.  They were kids just a few years back & here they are as "family men" now... what a world... 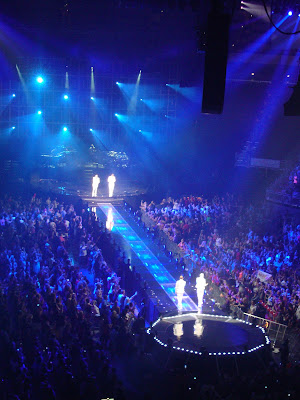 For Erica & I though (& the guy next to me) - it was just about the NKOTB ... I was impressed with Jordan Knight & how good he still sounds... & how high his voice actually could still get!... & MOVE!  Dude can still pull out the moves.  They even acknowledged that there were 2 generations there - from 1989 & from 1999.  The 1989 crowd totally dominated though... oh yeah baby.  I dont think concerts in 1989 had so much smell of beer though... the drinks were flowing all around us.  The lady next to Erica, I couldnt believe was still standing at the end of the night.  I think she REALLY thought she was back in 1999!!! 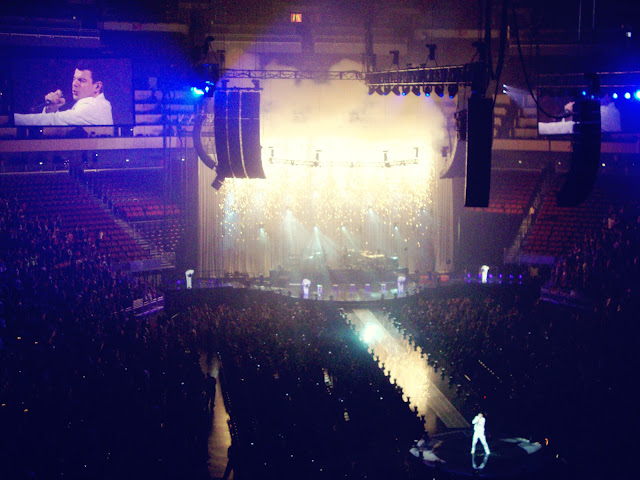 The end was awesome too... woulda made Mr. Shue proud if he was still in the building because they did a mesh-up of a big song from each group.
The whole concert was just so worth the wait of the months... amazing, awesome, fantastic, spectacular.... 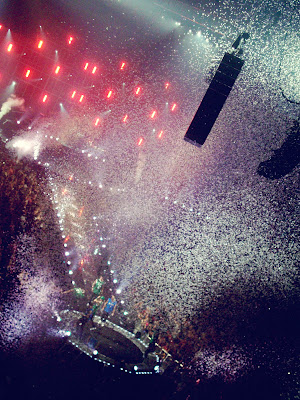 Thanks Erica for enjoying the night with me... I couldnt imagine sharing it with anyone else! 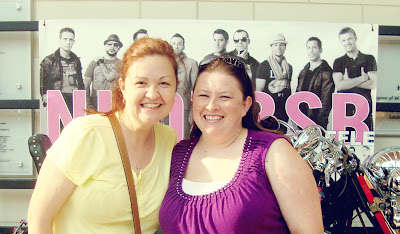