The weekend I watched so much tennis... {Hello Monday}

OH my goodness... ALL THE TENNIS!  I can't even begin to say how much I loved this weekend watching ESPN.

Yes.  Let's sit a second & appreciate this thought. Me. Rebecca Jo.  Sitting in front of ESPN all weekend.   It only happens twice a year.  July & September.  Wimbledon & US Open time.  Give me all the tennis.

It's funny because the other day I told someone that I dont really have many thoughts or idea for a Bucket List in my life.  I'm not that creative with goals.  After this weekend, I thought about my first (or 2nd) goal on my Bucket list.... to see a Wimbledon final or US Open final in person. Wouldnt that be the best??? I'd love it.

Before all the finals, on Friday I took my momma to the grocery to pick up some things & then we ran over to Walgreens just to pick up an extension cord.  Nothing is ever a fast trip with us... we ended up spending oer an hour shopping in Walgreeens.  We're wild & crazy chicks like that. 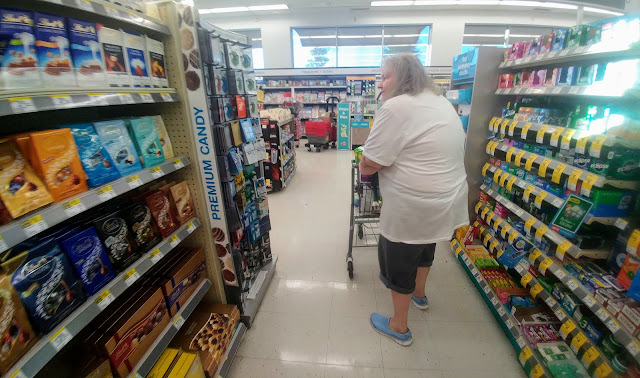 Actually, it was really nice because the pharmacy was closing so they were pretty empty so me & mom got to look around & find some goodies.  I walked out $50.00 poorer from hair products, because thank you Walgreens for trying to give me hope for these frizzy hair humid days.

I got back to mom's & we just waited until the sun went down before I let Baby back into her stall so she could get some more time out.  While its super hot, we've kept her in her stall so Cochese can stay in the barn out of the sun.  That barn is in the perfect spot so there's a constant breeze going through there.  But they both can't be out in the barn together.  No fear - Baby's stall has a wire fence on it so she can feel the breeze & she has an outside door on her stall as well so she can get air from the other side & see out.  Plus, Cochese & her touch noses all day long through her fence. She's never alone in there.

So anyways - we let her out of the stall when the sun is going down so there's lot of shade for Cochese to run around in & then Baby can go to her grassy area.

I may have waited too long on Friday because it was PITCH BLACK in the barn when I went to put her in. I had to take a latern to see - & praying I wasn't walking near any snakes. 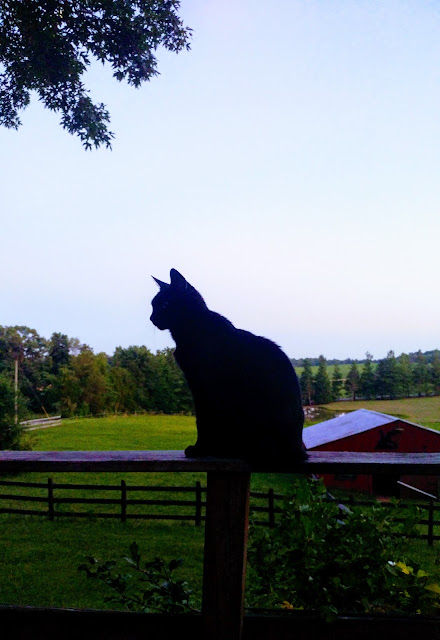 Saturday, I woke up to find Ricky was already out working on the fence.

I took my breakfast outside to cheer him on & then he took a break to come up with me & the dogs. 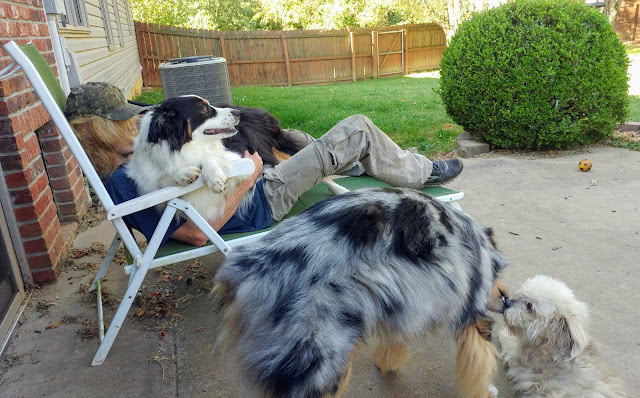 I always will support my love - but the support was cut short when I saw the clock & knew the Women's Finals was on.  Get my cup of coffee ready, get in my sport - & let the fun begin. 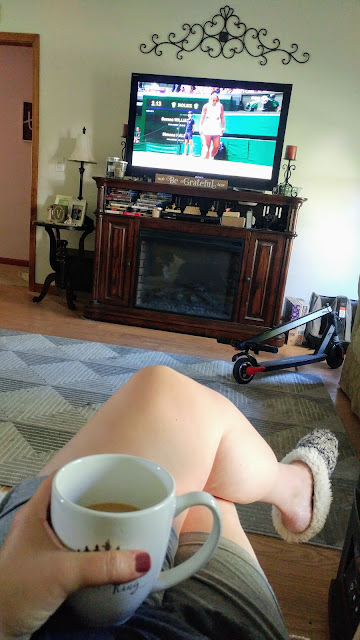 I was excited for Serena to be playing - but man, she just never got on a streak... & I really thought the woman who won played incredibly.  So that was fast game.... 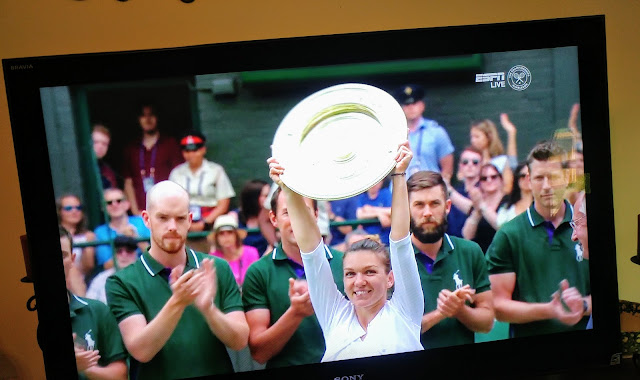 I cleaned up a little after that went off & actually got in a workout (go me!) & then Ricky asked if I wanted to go out to grab some lunch.

But lunch got pushed back by the time we left & then took care of the horses & then had to stop at Home Depot - so we were like, "Let's go out for dinner" 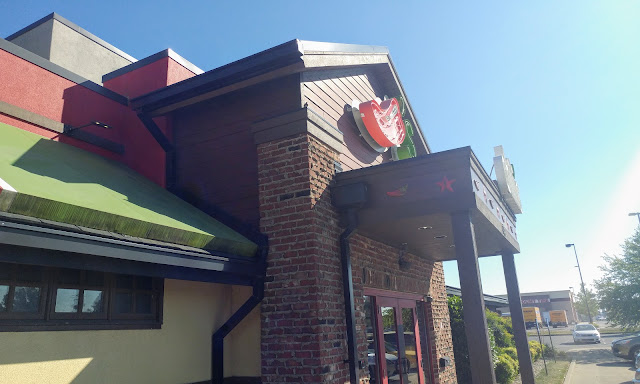 The rest of Saturday night was just lazy.  We played a game. I watched some more Gossip Girl.  Showers & dog snuggles.  A good night.

Sunday, I knew I wasn't going to church. Wimbledon Sunday.  Can't miss it. 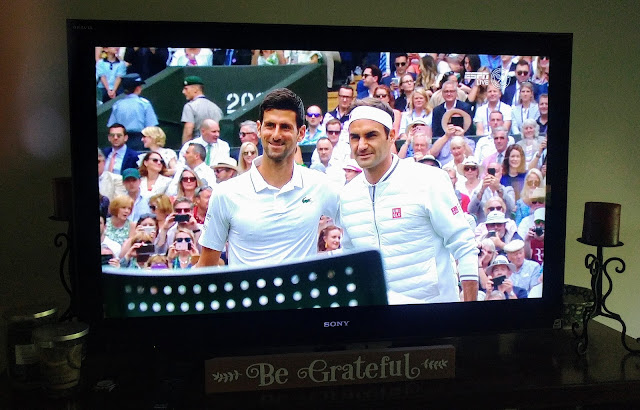 & MAN OH MAN am I so glad I stayed.  I probably could have actually went to church & came home because the game would have STILL BEEN ON!


& my guy won too!  I was all for Novak Djokovic..... mainly because the whole crowd was for Federer.  I actually didnt have a favorite going in. Ricky even asked me, "Who do you want to win?" - I told him, "i'll be happy with either" - I really do like them both. But I felt SOOO bad for Novak because the crowd in the stadium was obviously for Federer - so I felt like I had to root for the underdog.

Plus, can I be honest? I really like Djokovic even more because he was on the new documentary from Food Matters talking about good nutrition & how it changed his game  & endurance & stamina.  It made me appreciate his game knowing the struggles he had & that he takes nutrition seriously - with the idea of "food is thy medicine" - I know most athletes do this - but I just watched this documentary last week so it was fresh in my head & made me give an extra "umph" for him in cheering him on.

(FYI - here's the link to that documentary if you like that sort of thing.... link.fmtv.com/transcendence) 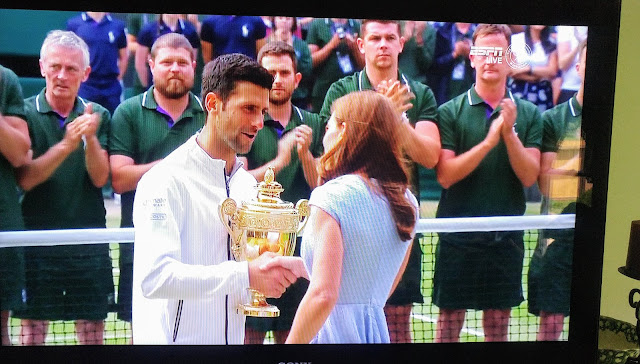 In the end, I think we can all agree they are BOTH winners with a match of nearly 5 hours.  & didnt even seem breathless or sweaty either.  #GOALS

I ran down to the grocery to pick up my order & got home in time to see that ABC was replaying the game.  Do you know I sat down & watched most of it again????.... I will confess - it's so much easier to watch when you know who is going to win....

Here's actual pics from me watching the game when I didn't know who would win....

This is me watching it the 2nd time around....

Ended the weekend with usual horse duties & Big Brother & one more (maybe 2) of Gossip Girl before I dozed off....

Do you watch Wimbledon?

If you did, please tell me how much you loved this game too!!!

Enough Tennis talk - tell me what is your favorite Walgreen's purchase you get?

Linking up with Tanya - Click pic to join in!