The weekend that the stone was finally placed....

Happy Monday!  Here we are yet again.

How was your weekend?  Ours was much better in town - from what I've heard or gathered.  Maybe?  I honestly stayed away from  the news as much as possible this weekend - & stayed off of Social Media for the most part.  It's just all so much lately.

Between seeing protests that are over taken by looters & ruin peaceful protests that are trying to get their point across & seeing police push old men down on the ground & just keep walking on by, & hearing that the COVID numbers are going up.... nope nope nope. I needed a break.  I had to just walk away from a bit.  2020 is just wearing me down fast.

I started off my Friday by SLAMMING that computer shut when I got off work. I didnt even get off on time - I had a little over time - which is the perfect description of how my whole week went last week. It was just chaos every single day.  I just needed the weekend to get here & when it FINALLY did, I literally ran outside & just sat in the sun shine.... & nearly  melted. MY LORD - it was so hot & humid.

I had Ricky pick up some dinner because I just refused to cook & Friday's are made for take out.  Penn Station to the rescue.  Except Ricky forgot & drove half way home before he remembered the order... & then they messed it up.  So Friday was just a hot mess for our family in general I guess.

We waited until the sun went down to "cool off" - HA - before we went & cleaned out the horse stalls & did all that fun jazz.  Nothing like finishing off Friday with a bunch of chigger bites & sweat pouring down my back.  I couldnt run fast enough in the shower Friday evening.

Saturday - I was up pretty early  Really anxious too.  It was a big day for us.  My dad's head stone had gotten laid earlier in the week.  My brother & I drove up early in the day to check it out & make sure everything looked alright.  We were so happy with it.  It turned out so much better than we expected. 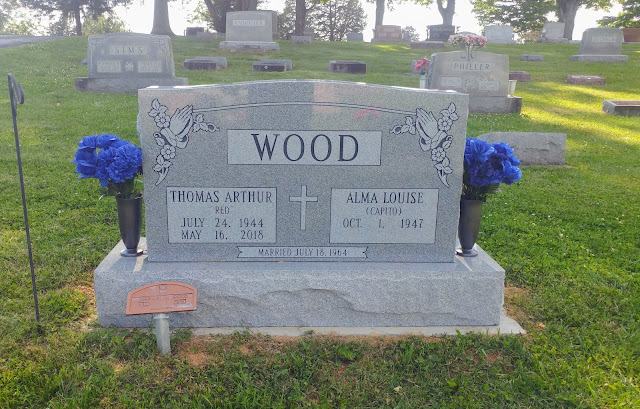 You know when you pick things out in store, I just knew that in a building, it would look different out on the grounds - with no ceiling above it & stones all around.  It was hard to judge what the size was going to be.  We were so happy with how it looked - especially next to my great grandfather's headstone which is a fairly large one.  We didnt want something that would look super small next to his. 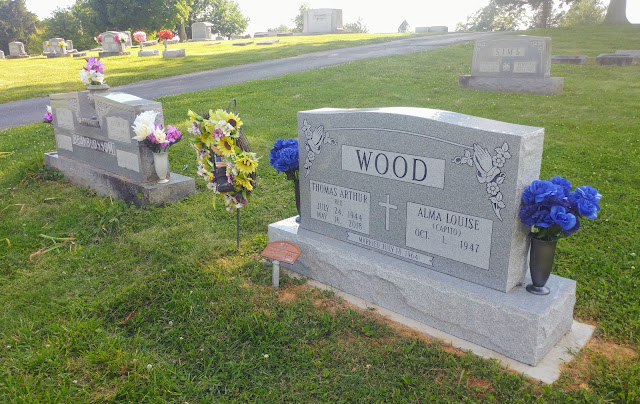 She was so happy with it too.  Seeing it all come together. 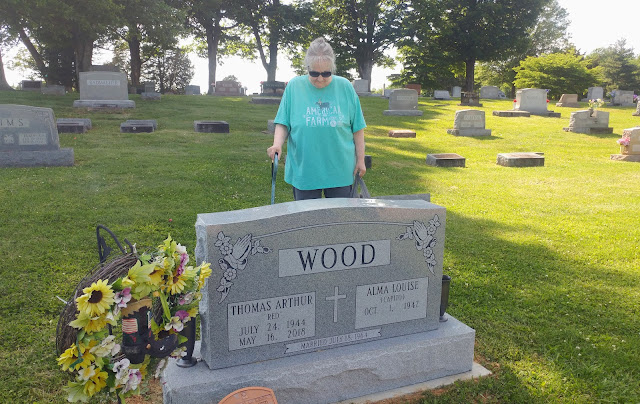 It took some time - between decision making on where to go, what size to get, design,  & heck, just money - these things aren't cheap!!! - we saw those months pass by - & then when we ordered it, the COVID stuff was shutting things down & that delayed it some too - but you know what - we're just happy its there & we have some place to put flowers & dad is 'recognized' there - which is a weird way to put it.

We were so glad how the back turned out too on his marker.  We had wanted to make sure that the horses or dad's "cowboy" side was remembered on here. We had so many _ SO MANY_ ideas & designs on how to do it & we just ended up going with putting horses on the back.  Typically, a name would go there - or maybe a quote.... but we ended up putting a tribute to dad's big babies on there....along with the scripture that sort of has been a Wood life scripture.  It's the same scripture that is on dad's parents headstone & his brother's.  It's very fitting. 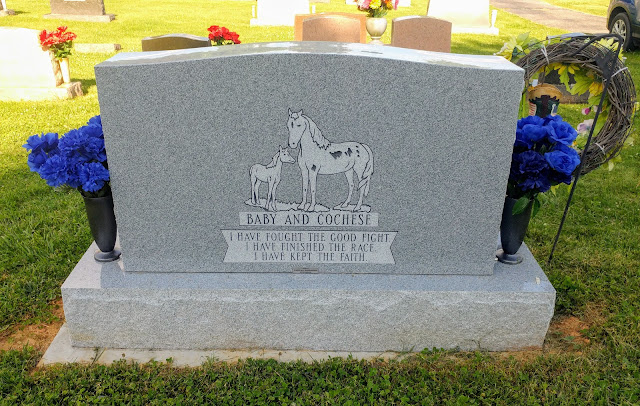 Saturday was also mom's first day out with the COVID stuff. She's been staying at home, safe & away from anyplace where she could catch anything... but she brought her mask & we were able to pick up the flowers for the headstones & a few things she needed before heading home.

Sunday, it was like the humidity gave us a break in the morning & I headed outside & finished up my book early before the sun hit that side of the patio.  A perfect book to read... my thoughts on it will be up tomorrow for the monthly book post. 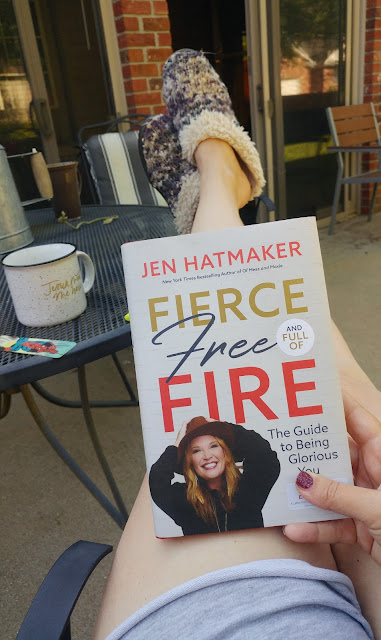 I have been living on some little K-Cups I've been picking up at the grocery & I told Ricky I had to get to Sam's Club. I bought a big box of coffee there right before the quarantine started & finished that up about 2 weeks ago.  I have been on a little panic about it - plus, I like the taste of the coffee I get there.... so Ricky & I ran down to Sam's Club & got some coffee & was so happy to see that they had a bunch of TP & Paper towels back in stock. HALLELUJAH!

It's funny to see that Sam's Club has a whole set up of disposal masks there now too.  $24.99 for 50.  That's the new thing to buy I guess. Who would have ever thought.

We ended up stopping for some lunch on the way home & I had been craving pizza. Pizza is something we havent really had in the past 3 months... so we stopped at Topp't. We werent even really sure they were open. No cars in the parking lot & they had all their spots for curbside pick up.  Ricky got out to see if we were allowed in & we were.  They had it set up where we could eat inside - but nope - I'm not ready for all that yet.  To go for us please. 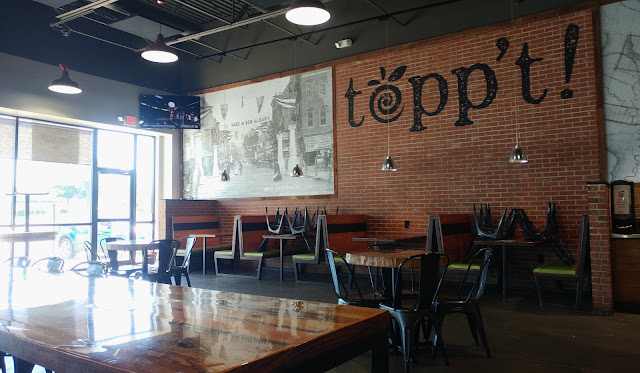 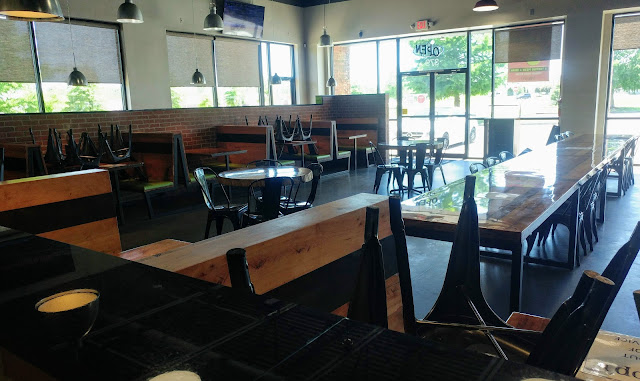 I know some people are having no issues with going out to eat & getting back to normal life.  I'm just not feeling it.  Good for everyone who's eating out & not thinking anything of it.... you do you.  I just can't. Sorry. I know that offends some people for some reason. I just am not comfortable with it.  But let's remember shall we, that I dont even like to go out during cold & flu season either.

& actually, after reading Jen Hatmaker's book - I'm going to take back that apology.  I shouldn't have to apologize for being who I am & how I'm feeling.   Read the book - you'll appreciate that & feel it to your core too.

I was proud of myself going in & even ordering inside - that was the first I've done that since March.  How crazy is that.  But I was even happier to get out & take it home & eat it in my own home where I had my own silverware, my own drinks & my own plates.   Just me.  In my own little safe bubble.

It really did feel nice in the shade the rest of the day so I sat outside & started a new book - my very first Book of the Month pick too (exciting stuff) ... & then Ricky asked me if I wanted to watch Aladdin. Can you believe we had never seen the new remake of it?  How old is that now???

We LOVED it -both of us did!  I didnt mind Will Smith as the Genie one bit. Though it does tug the heart for Robin Williams.  We went & saw Aladdin for one of our very first dates we ever went on so while Beauty & the Beast is my go-to - Aladdin  is pretty special too.

The rest of the evening was spent straightening up the house ,doing bills, checking Ricky for ticks where he did all the mowing in the woods.... ticks are CRAZY right now. I had one on me from being in the barn Friday. It's like you walk outside- you have a tick on you.  UGH. The worst.


But here we go - another week ahead.  Let's hope its one that has some calm  &peace & PROGRESS for GOOD in our world.  That's the prayer, isn't it?

Was your city protests all peaceful this weekend?

Ticks bad where you live?