Where did the good stores go?

Ricky & I had a "flashback" of sorts the other day talking about stores that we used to go to all the time when we were little.... it's so funny when we would remember them.

The first one that comes to mind is TG&Y... anyone else remember that one? There used to be one down a few streets away from our house. My mom & I would go probably DAILY to just look around. It was just a normal 5 & 10 cent store... but it was just fun to shop around. When it went out of business - I think my mom & I went into mourning for quite awhile! And TG&Y wasn't playing around... I remember one time, they had ROBIN from the Batman TV show come in & sign autographs! How funny is that! I think we still have it somewhere! I can also remember getting those great Halloween costumes there that had the hard plastic faces that you couldnt breath out of .... aahh - memories! 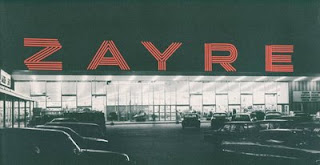 Anyone else remember Zayre's? It was like the Target of the day! As a matter of fact, our Target went into the same building Zayre's was in... is it the same business with just a name change? Hmmm - gotta look into that! But look at this sales ad from there... I cracked up when I saw this because I HAVE that tree house! STILL!!! The twins will play with it at my parents house! Talk about a MAJOR flashback right there! 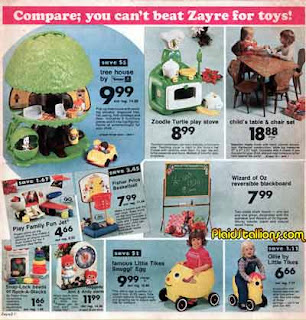 And who else remembers Bacon's????? This was the Kohl's of the day! My grandma would take me there every year before school & load me up for school clothes & every summer we'd go there & get EA (Etienne Aigner) Sandals - nothing else would do for her... it had to be that brand of purse & shoes for her.

And they were the store that would have a "Midnight Madness" & it truly was! It was the first time I would go shopping that late & cars would be PILED down streets & there were limits with how many people could get in due to fire codes... it was crazy shopping before crazy shopping existed! The event only happened like twice a year & I can still remember going with my parents & grandmother like it was yesterday!

Do you all remember any of these stores? What stores did you shop at when you were younger that's not around anymore?