If you look on Monday's picture, you'll see a new knee brace.
Yeah, my knees are acting up now that I'm getting in some miles for the week ... to be expected. They usually hurt worse then they are by now... & they usually start a lot earlier in my training, so I'm not complaining. I'm actually happy they've held out for this long.
I give credit to the strength training I'm getting in.
But I wanted to try a new knee brace.

I really like this one because the ones the covered the whole knee are so confining BEHIND the knee when you bend it so much running.  This one seems to be a little bit more flexible in that area.  & the front?  See in the picture above the white areas they have marked?  They have a heavy 'wire like' compression thing in it that really holds the knee & hits areas that puts just the right amount of pressure.

I actually used it on Monday's run on one knee & then tried it on my other knee on Saturday.
I liked it so much, I just ordered another one... & one for Ricky.
We're growing old together, that's for sure.

The only qualm I have with it, & I see in a lot of reviews, is they slide down a bit.
It didn't happen yet - but it did feel like it COULD slide down.  Maybe its just a weird sensation with this compression & how it fits & something I'll get used to.
As for now, I'm giving them a thumbs up.

& for the weight loss update... Where do they get these things?
A midsized Wolverine? ... you totally know I'm going to use this as a moment to use a Hugh Jackman picture

For those of you that don't know me well... Beauty & the Beast, Steven Curtis Chapman & Hugh Jackman are the 3 things in life in entertainment world that makes me happy.
#randommuch

I want to hit 22 more lbs by the time my half marathon came around - which is only 8 weeks away. So even if I lost 2 lbs a week, I'd still not hit my original goal - which isn't likely anyways - its usually more like a half lb to 1 lb a week at this point.
Drats.

But that's OK... I'll get to that goal eventually.
Maybe just not hit it at the half marathon mark.
& that's OK - I've come a long way already... & I'll eventually get to where I'm going.

& heck... who knows what can still happen?
NOTHING IS IMPOSSIBLE - right?

ONTO week 9!!!
& onto a 10k this Saturday.
Keep fingers crossed - its supposed to be warm - but rain chances look iffy.
This is my FAVORITE RACE too so I'm looking forward to it.
PRESSING ON!!!! 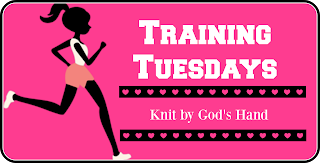