To jump right in & to not let anyone freak out... as of right now, everything is fine. It's not me or Ricky - but Julie got the news Saturday morning that she was COVID positive.  To say we were all shocked is an understatement.  I wont give much in detail because this is Julie's health & story ... but she did not think she had COVID.  She had stopped by the clinic in the hospital she works for something entirely different - but after a little bit of a conversation, she was directed to COVID testing.  When she got the results on Saturday, she said she just keep looking at it for a few minutes because she was like, HUH? What? Really?

Like I said - she's doing OK.  Feeling just some symptoms you could chalk up to totally anything else- nothing scary.  & that's where were praying it stays.

The grands & her husband & mother in law & all got tested Saturday right after she found out - so they're hoping to get the results today.

In case you're new around these here blog parts - you'll remember - Julie has her PhD & is a Scientist, working with infectious diseases & bacterias a lot. She does work in a lab but she really has no idea where she could have contracted it - no obvious place.  She knows all the facts & figures on this virus more than any of us could - I mean, that's her JOB.  She has more inside scoop on this than we would ever wrap our minds around as just people that watch the news & rely on info for source of keeping up to date on things.

It really freaks me out when she talks about the virus as "sneaky" & "Smart".... how it knows how to spread so easily. & how little we can understand how smoothly its just traveling from person to person.

If she didnt get tested, she probably would have just gone on with life - chalking up just the icky to something else.... & like she said, "who knows who else I could have infected"... her words were 'THIS is why EVERYONE needs to wear a mask" .... we dont know who has it & this is why its spreading so fast.

You hear me all the time say how people just want to refuse wearing a mask.  WHAT IS WRONG WITH PEOPLE?  I dont get political. How many voting seasons have we had since I've been blogging here since 2007?  I never say anything because I understand that's your personal decision on how to vote.  But now, people's personal decisions are effecting everyone around them with health issues.  That makes it SO NOT a political issue...

It's infuriating to me. INFURIATING.

Kentucky made it a mandate to start wearing masks beginning Friday at 5pm.  Do you wanna know what most of the conversation was online & from people working & being out in public?  A big ole "YOU CANT MAKE ME".  Dear Lord - please have mercy... the selfishness & stubbornness.  It really does baffle my  mind.


I really could sit here & type out all my feelings & anger on it all - but I've learned - it doesnt change one dang thing. There's no changing people's minds on this topic. I truly believe it will only take this virus touching someone's own personal family before someone will change their mind on it. & at the rate its going .... that's what its going to do.  Touch someone we will know.   My prayer is that I hope that person has the immunity & the strength to be able to handle it... be one of the ones that aren't in that 5% that people love to throw out the number that "it's ONLY 5% of people that die"....

anyways....please keep Julie & the Nashville gang in prayers - for Julie a negative test soon - that the rest of her household comes back with negative results -  & that the 14 day quarantine period doesnt drive them insane ;)

... I had to go right after I signed off work Friday to get an ultrasound with all my pain I've been having.  That's always fun to have 2 pelvic ultrasounds in one year.


...Ricky had to work on Saturday so I went outside early before the heat came in & was doing my bible study when Ricky called me & told me the news of Julie.  I hung up from him & called her & she had me so anxious talking about it - I turned to what I do with stress - CARBS!  ... I ended up making a batch of pancakes to eat my feelings. 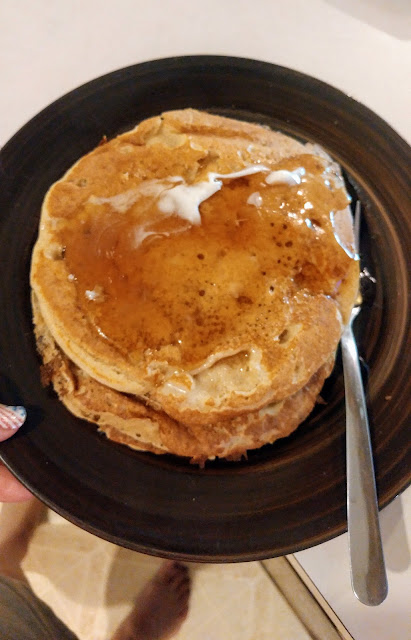 ... I took my mom down to Target so we could pick up some things & we of course had to do  Starbucks run.  I was going to get my usual iced coffee but it was so dang hot that I went ahead & got a frappaccino... which we both got a brain freeze in about the first 5 minutes of drinking it.  So worth it though. 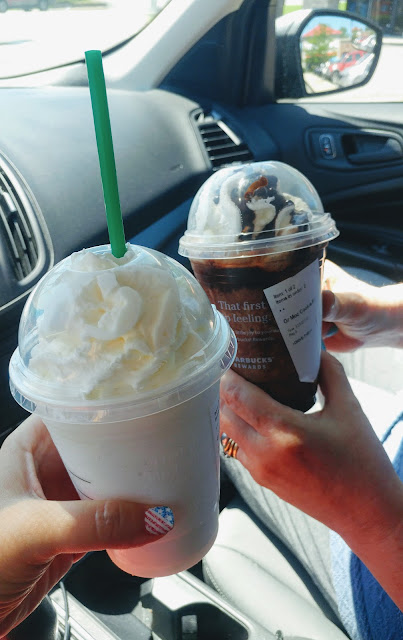 ... My brother got to come over & see Ricky's new lawn mower.  That was good to see him up & moving.... abet SLOWWWWWWWLY.  & he looked exhausted after walking up the drive way - but it's just been under 2 weeks. I'm so impressed how well he's doing.  I had to give my tennis playing niece a tee shirt I had found earlier when me & mom went out.  I couldnt resist. I told her I was living through her getting this shirt.  Isn't it so cute? 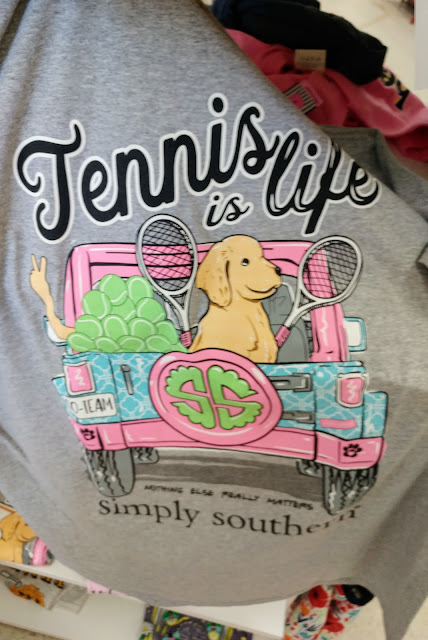 ... Ricky & I headed back to mom's to take care of the horses & when we were leaving, I could hear thunder.  Next thing I know, my phone is dinging up a storm with alerts.  We got home JUST in time. This storm moved in SO FAST!!!!  I had taken Zoe outside to potty before it unleashed & man, the wind.... I could hear trees cracking & snapping all over the place. 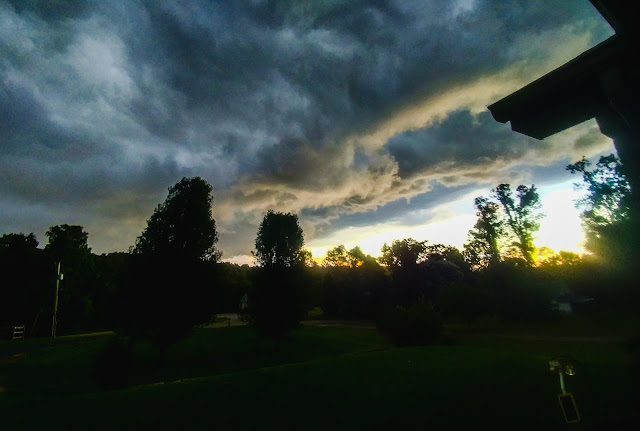 ... Ricky went out to look in the back property & saw just where all the snapping happened.  This tree is right next to where we buried Bruno.  Actually why we buried him there - & it just was split. I wonder if lightning hit it.  Luckily, it feel away from Ricky's little shed back there & just was short enough to miss our neighbors pole barn. WHEW!  Perfect fall tree! 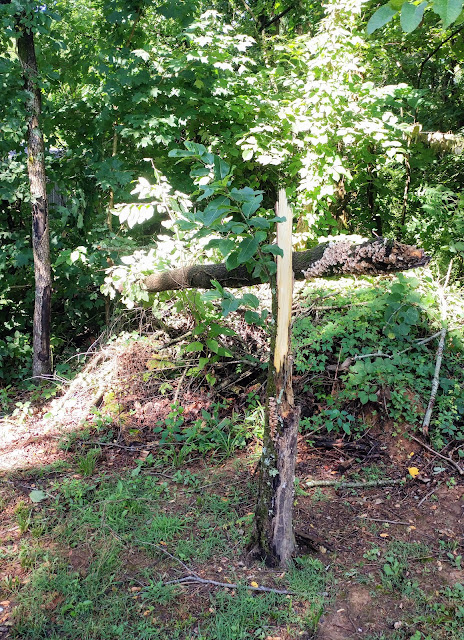 I took this picture looking at the branch.... but then walked on the other side & saw this.... I was like Thank you Lord - your sign of mercy & grace... right there where we were talking about how bad it would have been if it fell any other direction. 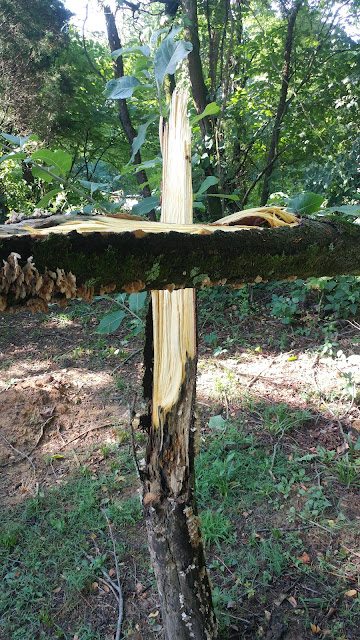 ... I continued church from home.  Loved the message & the reminder that as Christians, we are called to submit to the government unless it goes against God's Word... & how Jesus called us to LOVE ONE ANOTHER.  There's not stipulations on this. Even if you feel uncomfortable or have to do something you're not used to doing - you are called to LOVE ONE ANOTHER.  Preach Pastor - PREACH!

... We ran down to pick up groceries. I'm glad to see Kroger Click List is back to normal & isn't an hour way in the parking lot.  We were in & out of there in 5 minutes.  Making life so much easier.

... I only got in Hamilton two times this weekend.  I basically can NOT stop singing it.  The Hubs is even like, 'Can you PLEASE STOP?"... I say back, "Just you wait"... Hamilton people - you get that.

.
.. I spent the rest of Sunday night reading.  The temps were the lowest they've been all week long - & the lowest for the future week.  Plus I got my new Book of the Month book in - so I'm jumping in.

& speaking of books - tomorrow is Show Us your Books - so get those Goodreads lists ready.

Has your state done a mandate on masks yet?

Do you know anyone that has been diagnosed with COVID yet?

Did you get any storms this weekend?