Can you all believe August is at the end of this week. AUGUST.  I honestly am just mind blown. I saw a tweet that said something like 2020 has been both the fastest year mixed in with the LONGEST year of our lives.  Isnt that true!

Anyone else seen any Christmas stuff out?  Yep - I have.  Saw some at Hobby Lobby & some at Sam's Club.  Can anyone even imagine how Christmas + COVID are going to mix?  I think it'll be more a mix of Hallowene + COVID. A much better combo.  ... saying that, I do get pretty excited about seeing Halloween decorations out. All the pumpkins & leaves.  I even saw THIS in Sam's Club this weekend.  The first sighting of Pumpkin Spice goodies. 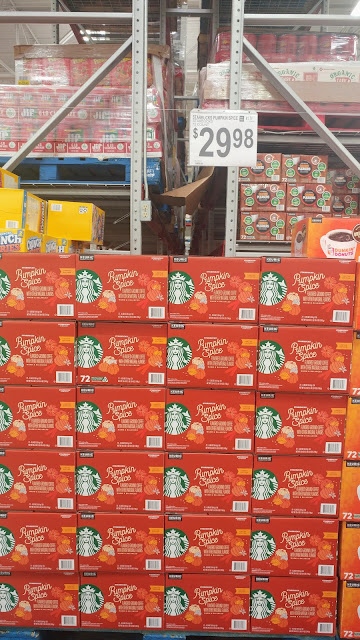 Ricky was like - NO MA'AM - we will NOT be getting pumpkin stuff yet.

Joke's on him - I dont like pumpkin flavored coffees.... I'm about coffee CREAMERS! HA!

So Friday, it was one of those heart tug days. It was my daddy's birthday.  He would have been 76 years old. Which to me, even with him passing just weeks away from his 74th birthday - he never struck me as someone in their 70's - he was truly a kid at heart & proof that age is just a number.

I did have a little cry - of sadness & also of joy - because I'm sitting at my desk at home working & I look out my window that i see every single day for 9+ hrs a day... & I see new flowers.  FLOWERS.  Coming up the bush outside my window. 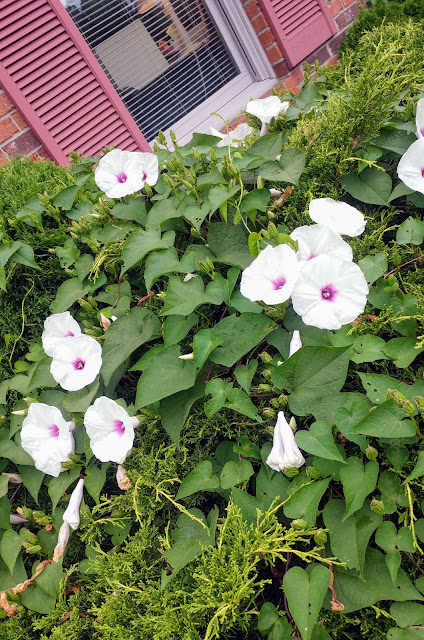 OK...let me stop here & tell you a little story.  My dad created a covered wagon that was over a ramp to his front porch & he had wired under the lining & wanted so badly to have flowers going up the wire so it would just be full of flowers when you walked up it.  He never got it to work.... but he would have a flower or two bloom each year but it would just never creep up the wire.

So when I looked out my window on his birthday & saw THIS flower - it just made me cry.  THIS is the same kind of flower he was trying to grow. If not the same, very similar.  & I have no idea where these flowers came from.  If it's a weed - I dont even care - it still popped up the perfect time for me & I just know it was a little gift from my dad.  I tend to get these little reminders from my dad on the most perfect days - Father's Days - birthdays - days that I just need little nudges that he's OK.

My niece was playing in a tennis tournament Friday & Saturday & I was going to try & make it down to see her when I got off work - but I would have just made it at the tail end of her game so I just planned on going on Saturday.... & spent my Friday with dad's horses.  I kept singing "Happy Birthday" in the barn with the horses & Cochese just gave me his look like 'Just feed me woman" - & Baby of course was all about it & jumping around & then scooted her butt up to me to rub it.  That's how you celebrate a birthday.  I gave them extra peppermint & told them that I know they miss their daddy too & we all just know sugar helps get you through. 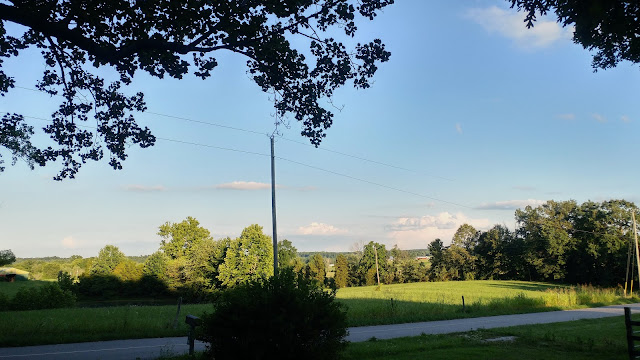 Saturday, I woke up with some sort of sore on the roof of my mouth & my sinuses hurting me so bad.  Every time I spent too much time in the barn, I tend to have some sort of sinus thing happening. Me & Hay - we dont mix.  It always leaves me itchy too. We're just not ever going to be friends.

I popped some Alleve though & headed out to watch Sophia play.  With COVID canceling her first year of tennis games for her high school, I was excited to see the racket back in her hand.

She ended up winning the first game - but it was the LONGEST game.  All the other games had ended - like a LONG time ended ago - but she & this young man she was playing was in a tie breaker match & it just kept going back & forth - back & forth.  She ended up pulling it out - but that only left her 45 minutes till her next match - where everyone else was getting over an hour - hour & a half to rest.  Bless her heart.

Plus - it was HOT!!! HOT HOT HOT HOT HOT!!!!!  I remember playing tennis in the heat & humidity of summer & it always just wore me DOWN.

Her 2nd match of the day - do you know she had yet ANOTHER game that had to go into a tie breaker & it was stretched out too.  At least she was equally matched.  AND - she won that one too. After all the struggle - I'm glad she came out of the day winning. 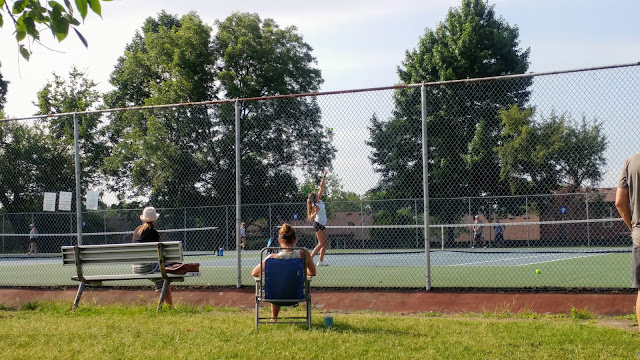 Me, my brother, SIL & my other niece sat in the shade the whole time - & honestly, it wasn't that bad for us. But there was another match happening 2 courts down from Sophia & I nudged my brother & was like - something is wrong with that guy.  In this tournament, there were matches of every age.  This particular one had a young teenage boy with a man - he looked like he was probably in his mid 20's.  I thought, that poor kid is gonna get slammed.  But this man was just NOT right.  He could hardly lift his feet & he was struggling to pick up a ball or walk from one side of the court to the other.  It was bad.  I told my brother, this kid just needs to barely knock the ball over the net, because this poor man wasn't even  attempting to run to get the ball - get this game over with fast.... the kid did this & the game was soon over.... but he was walking off the court & we just kept watching because I thought for sure he was going to go down any second.  ..... needless to say, we turn around a few minutes & he was laying in the grass & they took his shirt off of him & was pouring water on him.  He had a wife & little daughter with him but I guess the wife had the little girl over on the playground to keep her occupied so they hadnt seen his match & how much he was struggling.  They ended up having to call an ambulance & they had to take him to the hospital.  The heat was NO JOKE.  It  made me even more amazed how Sophia played these super long games in this heat.

It always amazes me the conditions that they continue to have sports in.  It can get pretty dangerous.

I ended up getting home after running & picking up some more elastic for mask making & I guess from just SITTING in the heat - IN SHADE - it finally hit me. I was exhausted.  I came home & made some coffee & worked on a baby blanket I'm making.... & turned on the new show on Netflix - Fear City..... 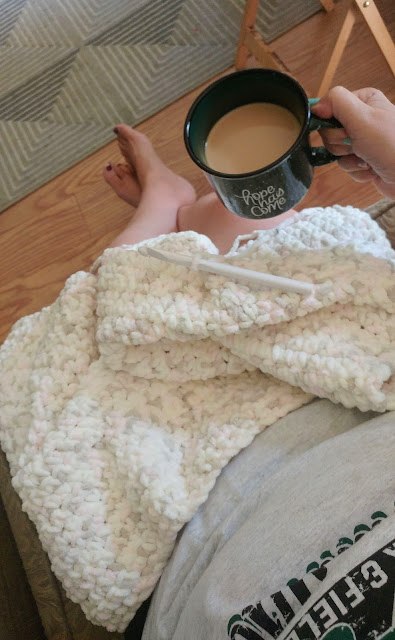 ... & then I took a little snooze. Which we all know - I HATE naps. If I nap, you KNOW I'm barely hanging on because I will do anything NOT to nap.

This show was crazy.  Everything Mafia just is intriguing to me. Call it the Italian in me.  What a time in the 80's where they were going after the 5 Mafia Bosses.  It's got some GRAPHIC pics in this if you're sensitive to that sort of thing.

My Saturday ended with a friend who came over to give me a gift.  She had told me that she found something that was just created for me & that she knew she had to get it for me.  I was so anxious to see what she meant.... & she said she had ordered this forever ago hoping it would be in for the 4th of July.... If you're new around these parts, this is what my dad used to do to his horse for the 4th...

& when dad passed away, my brother carried on the tradition.

So she said it didnt get here in time, but then she saw it was my dad's birthday & that was an EVEN BETTER timing for this to come to me.  So here we are again - just the little reminders of my dad at the perfect time. 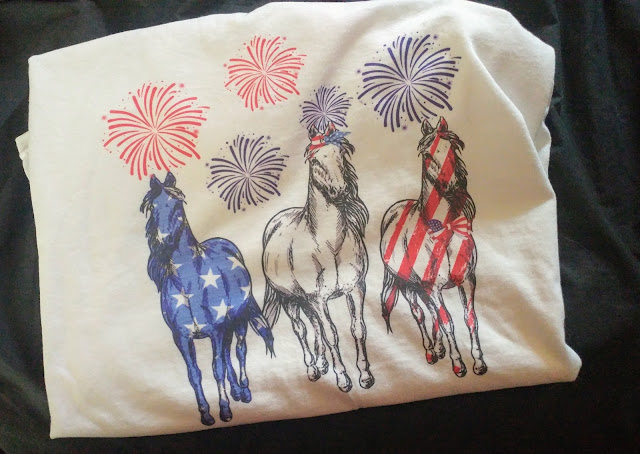 Denise drove it over & it just made me smile & choke up a little & I just knew my dad would have loved this so much.  I had to send a pic of it to my brother.  He wasn't able to paint Cochese this year because he was in the hospital recovering from his surgery that week.... & honestly, COVID cut off all the 4th of July celebrations anyways too.

I said I know this shirt is going to be inspiration for 2021 for Cochese.... It  may be Baby's first year of being painted too.

Sunday - it was a day of running around & getting stuff done. I did church from home first - but I needed to go to Sam's Club -& Pet Smart & then go pick up my groceries -ONLY to get told they were behind & it would be 3 hours before it was ready.  I told them to forget it - I'd come tomorrow to get the groceries.  My car was loaded down anyways.

& of course, we had the most important stop of the day.... a trip to the Homemade Pie Kitchen.... because did you remember what I said earlier - sugar helps get you through.  This was just a 'get me through 2020 push' - I think we are ALL needing those kind of pushes lately. 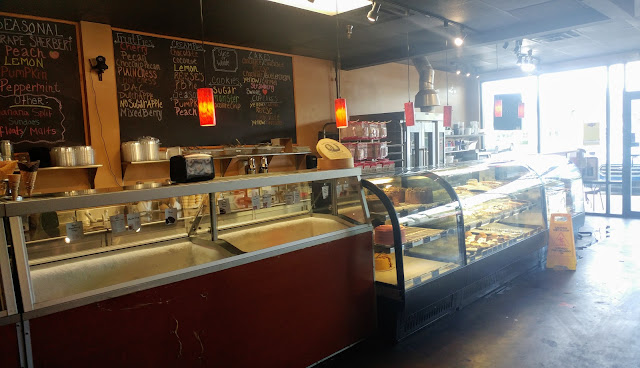 The rest of Sunday was back at my sewing machine.  I cranked out over 20 masks.  A girl on a mission.  I had sold out of so many different ones & needed to put some back in my Etsy store.  I've learned anything Collegiate & Disney, they are sellers.  Ricky agrees with the Collegiate stuff - I am on Team Disney. We complete each other.

Are you all still the throws of summer heat?

Have you seen any Halloween or Christmas stuff out yet?

What's the best gift someone gave you that was just made FOR YOU?