One year of the Pandemic

I saw this on The Queen In Between's web site... & since March 20th is the one year mark that was the last day I was in the office to work, I figured it'd be interesting to look back.  I almost said "Fun to look back" & then was like, nope.... this has not been fun at all.  Let's see how the past year has looked for me. 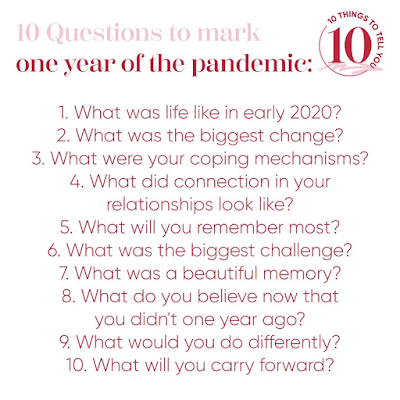 1. What was life like in early 2020?
Life at the beginning of 2020 was like it typically was for me - busy. Always on the go.  Something on the calendar.
2. What was the biggest change?
I felt like I was hardly ever home & now, a year later, I dont think I ever leave the home - HUGE change.
Also, we were a couple that ate out quite frequently.  To think we have not eaten in a restaurant in a year - that is MIND BLOWING to me.  When I have to look at a menu or wait for food to be brought out to me, I may not know how to handle the situation.
Of course, the biggest change for our household was the loss of Bruno - I miss him so much.
And also the addition of Ozzie.  He's brought such life & fun into the house. 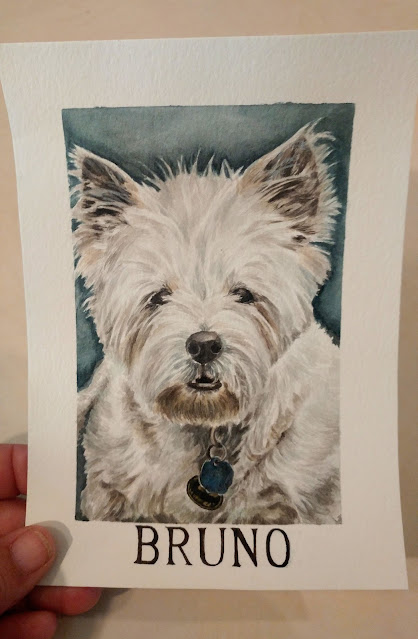 3. What was your coping mechanisms?
Walks, dogs & nature.
I did a lot of walks down my drive way & up & down the street.  Feeling like I was "out" but not being around people.  Plus, sitting on my back porch with my dogs always soothes my soul.  Hubby has been working hard on clearing out some trees in our back property & its just been a nice place to walk & go back & just breath in nature.
4. What did connections in your relationships look like?
This is an area where things are better & some are different.
The relationship with Hubby was really lovely.  I know a lot of people said that too much togetherness was tough on them - for me, I feel like we havent spent this much time together without having to run around & plan schedules in years.  It was endearing to see that we still get along - especially because we celebrated our 25th wedding anniversary during this past year.
I think relationships with friends took some bumps since I didnt get to see people in person.  I valued even more the friends that reached out & messaged me & called & stayed connected in some way.
5. What will you remember most?
The Holidays. How different they were.  Not seeing family on big days - Christmas being the biggest one. & the family we did see, seeing them behind a mask, outside. It was like a whole other world.
Just the disconnect from the world really.
Let's also not forget the toilet paper craze.  Still bizarre to me to think that toilet paper was the thing that was hard to get. Like Precious Gold.
I think I'll also remember how stubborn people were about COVID.  How people didnt believe science & chose to make it political.  How it brought out the worst in people. That's something that I dont think I'll ever forget.... & see it lingering even now. Sadly.
6. What was the biggest challenge?
For me, dealing with the fear.  I only went to a few places & when I was out, I was constantly aware.  What I was touching, who was around, how close they were to me. Hearing someone cough or sneeze & I wanted to bolt & get back to my home.  Especially in the beginning where so much was unknown.  It really came down to a point too where I had to stop watching the news on it because all the updates were just so overwhelming to me.  It really wore me down mentally.
7. What was a beautiful memory?
Honestly, the slowing down in general was a beautiful memory. I dont think it would have ever happened otherwise.
8. What do you believe now that you didn't a year ago?
That I can work from home. When we were told to work from home, none of us knew how that would or COULD work.  A year later, we handle all the issues just like we would in the office. It's really impressive that technology allows it & that as a team, we get it all done.  I know this wont last forever & we'll be back in the office soon, but I never even knew it was a possibility a year ago.
9. What would you do differently?
I'm not sure.
I want to say I would do more things - see more people - because in the end, being as safe & cautious as we were, we both still got COVID.  But I really dont think I would do anything really different.
Maybe not eat so much & stock up on toilet paper & Lysol wipes - I'll go with that.
10. What will you carry forward?
Gratitude.
Thankful for my husband, my home, my family & friends, my dogs, my job - for my health.  That all these things got me through the past year with smiles & security & normalcy.
That its the simple things in life that you really need.
How are you coming out a year later?