I'm the queen of rare things 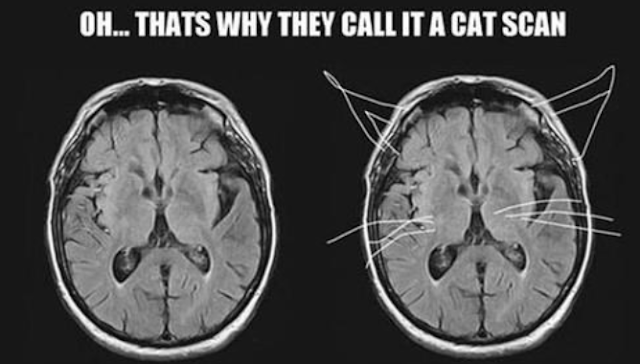 I got in the mail this week the sweetest card from a friend wishing me good results on my latest scans I had talked about having done.  (Thank you Christina!) ... I actually mentioned the tests in passing & that's right when my rush to get an xray for my ankle happened & I just sort of forgot all about talking about it here..

You all know I dont care for the doctor & put off things as long as possible.  Probably not a smart choice in a lot of things, but really, I just get a ball of nerves when I think about the doctor.  Though, I'll stop & add in really quick that I really REALLY like my new doctor & hope she sticks around for awhile. My last 2 doctors (I prefer DO's instead of MD's) have all left the practice I go to .... & its not easy finding a DO around here.  This new doctor, she moved her because her husband teaches at the University of Louisville - so I hope they are in this area for quite awhile.

If you've been around awhile, you may have heard me talk about my myofascial issues... which was new to me when I was diagnosed with it - but let me tell you - IT HURTS LIKE A MOTHER!  It's a chronic pain disorder... & basically it causes trigger points in the body that just cause some intense misery.  It sounds similar to fibromyalgia - but Myofascial tends to deal with muscles more.

Did you know you were getting a biology lesson today?

For me, they said they think there is scar tissues from an appendix that had ruptured & we didnt know for years later...(That story is HERE if you've never heard it)  ... between that scar tissue & gall bladder removal in 1995, they think the scar tissue has basically weaseled its way around my body, from litreally top to bottom, causing the myofascial pain.

All that to say - if you know nothing about it, know this one thing....IT HURTS LIKE A MOTHER!!!

I've been in the emergency room with it twice because I've had such severe pain in my ribs, I would lay money that my ribs were broken.  I've gone to a few doctors about it, been tested for liver & pancreatic cancer each time, bone cancer - a lot of scary tests & then they send me to a myofascial therapist for myofascial release ... these are real things y'all... & still, every now & then, it comes back periodically & rears its ugly painful head on me.

I've been having some pretty bad pain again lately... which again, my pain can be from the side of my ribs, all the way down to my belly button ... I say its basically a big rectangle area on the right side that pain can pop up any time, in multiple places, for months on end....

Well, it got so bad, I couldnt lay on my stomach.  It felt like I was laying on a softball. Honestly. A huge knot feeling in my stomach - more so under my ribs.  I would have to shift my body to get off this "ball" - the pain would wake me up, or not even let me sleep... that got me worried enough to call the doctor.

My doc said she didnt think anything was wrong after poking around, but to be safe, it was time again to do a CT scan of all my abdomen area.

You saw the pic of my wonderful contrast I had to drink.... & the test was easy peasy... minus the salty metal taste for 2 days after from that contrast... ewwwww....

That was honestly me with every thing I ate or drink for 2 days....

So a few days after my scan, my phone rings... & it was the doctor.

I honestly thing I may have blanked out for a minute because that was terrifying.

This could not be a more accurate reaction from me when I picked up the phone.....

I was like - repeat that!  She said she knows that's scary when the doctor calls but she wanted to go over the results herself with me because she said if I saw them in my records online, I'd probably be confused.... because we all know, nothing is easy when it comes to me.

BIG WHEW!  Everything was OK!  She said there wasn't anything wrong - liver, pancreas, stomach - everything looked good. She called to talk to me though because the radiologist said it looked like I had colitis, which she says there is no way because you apparently are very sick with that in ways that I'm not.  She said it looks like the contrast didnt have enough time to work, or I might have moved or something made the bottom half of the scan look fuzzy.  But since I had a colonoscopy less than 2 years ago, & everything was fine with that - she wasn't worried at all.  So that's such a relief.

So once again, it's chalked up to myofascial pain... & she said that sometimes it can cause "knot like feelings" in  muscles.  I'm just glad to know I have muscles underneath all this flab.

The funny thing to me, she said, "The cysts on your liver look the same"

She said that when I had my scan before my surgery in December 2018, it was noted on those scans I had 2 itty bitty cysts on my liver.  Which - can you believe it- is very rare.
Geez man - what is it with me & rare things?

She said they're so small that its nothing to worry about - especially since its been nearly 2 years & they havent changed at all.  But it is something to maybe keep an eye on & get checked every few years.

So have you ever read a post this long to only hear - EVERYTHING IS OK.
Sorry to be long winded.  I guess its all the alone time at home.  It's giving my dogs a break from me talking to them.

I know. I should take a note from my doctor & start off with that.

Have you had to drink that contrast?

Did it leave you with a salty metal taste?

What's the oddest health thing you got going on?

Have you ever heard of Myofascial pain syndrome?  Know anyone that has it?