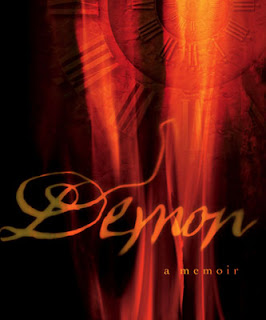 So I just finished this book a few days ago. I have to say - it really shook me up! Its weird because when I started it, I wasn't into it at all - then it took a turn & it drew me in ... then it just left me disturbed.


I would really compare it to Frank Peretti's "This Present Darkness" or I have seen it compared to C.S. Lewis "The Screwtape Letters"... but it really does make you think about the Spiritual Battles that go around us.


The book is about a demon named Lucian who finds a book publisher & wants to tell him his story - his memoir. It is a Biblically based book with references in the back where the ideas came from for these demon "rememberances" of his life.


The first thing though that knocked me off my feet was the idea of Lucifer & his fall. How we dont really think of him falling before man was created. But how long had it been since he was thrown out of the God's prescence? How long did he sit & stew & plot & hate before man was even created?

And then when man was created - Lucifer & the fallen ones saw something they had never seen before - GRACE! How they must have hated that even more - that God loves us enough to be merciful, even when we fail over & over.


Here's an example of what Lucian says when he sees someone accept this grace & mercy of Jesus:


"I'll never forget the first human I watched receive it, this gift. Before my very eyes, he changed from a shattered thing of darkness, like a mirror reflecting nothing but shadows no matter which way its fractured surface turned, into something whole, reflecting El's radiance, so that I had to - could not help but - turn away. On the outside he was still flawed. But the soul inside had come ALIVE, as though all defects had been erased"


The view of things through another perspective is wild!


And while you do read some insightful things - as the creation of man - or the birth of Jesus - or the crucifixtion of Christ & how the demons knew what was happening when man did not... there are some views that seem to be truthful - but sometimes the truth hurts:

"I see more judgement from churchgoers than anyone. In fact, I have a theory. I think they secretly delight in the shortfall of others. It relieves the pressure of having to be so holy. For a body of people who have received so much grace, they exhibit a stingy amount in return"


And Lucian talks about how he gets so tired of people of asking "Why do bad things happen to good people? His response "There are no good people"


A demon - who does not understand grace!


This book also shows the trickery, the scheming, the harmful & hurtful ways that demons work in todays time... & that's what shook me up! Because again, there is a bit of truth in it.


The more I think about this book now, the more I feel like its really opened up my eyes to new things. I know it is a book that will stick with me for a long time....