Yesterday was busy - which EVERYDAY seems to be busy to me... but I didnt get home until around 9 & then had a list of things to do before I could even think about getting ready for bed... so I turned on Dancing with the Stars LATE & by the time I could sit & watch it, I was just sorta fast forwarding through the dances - so sorry folks, the "normal" recap is out... but I still have some thoughts on the dancers.  And this is 8 hours later, so it'll be interesting to see what sticks with me....

Niecy & Louis - Still love the girl - but I think its time for her (or Chad) to hit the road.  She always looks beautiful in a ballroom dance - but I just think that "mean faced" Paso didnt suit her... I hate to say this, but she's not Top 3 potential.... but I love you Niecy, I really do...

Chad & Cheryl - Another one that I think can go.  I STILL dont see how he's made it this far.  I dont think he's a good dancer at all.  Seeing him wearing a pimp suit & talking about how hard is pimp hand is... ummm... yeah....I'm just anxious to see if/when he gets voted off, how long he & Cheryl will be dating.

Erin & Maks - Her Argentine Tango was very cool... She had to literally jump on the stage onto Maks' shoulders.  I would have freaked out & my jump move woulda looked something like Lucielle Ball - I would wrapped both legs around his neck & grabbed his head like a fireman's pole...Erin did it much more graceful.  That dance definitely suited her & her LLLOOOONNNNNGGGGG legs.  Their Rumba in the style of the 80's was blah to me... Cool she gave a shout out to Miss Leg Warmers herself, Edyta, though! 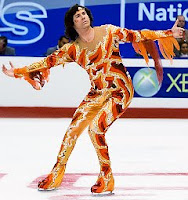 Evan & Anna - You KNOW he's going to nail a ballroom dance.  He's just so graceful... years of ice skating will do that... look at Will Ferrell as proof.  I was worried for Evan for the Latin round but they hit the lottery when they got "Futuristic" & was able to do a robotic kinda cha-cha... Didnt Anna look like the chick from Fifth Element?  How cute is Evan's little Wall-E voice too?  I'll vote for him just for that!

Nicole & Derek - WOW WOW WOW - that's all I really need to say about them.  First their fox trot was just the cutest little thing.  Nicole seriously made some of the pro's look like stumbling fools... & then they had a 60's Paso!  How do you combine that?  Derek was challenged but BROUGHT IT... All I kept thinking about was Cha Cha & Danny dancing in Grease... It was one of the coolest dance I think I've ever seen on there.  Some of the moves were so dang fast, Nicole was just amazing... but why did she look so glum afterwards though?

So you all tell me what YOU think...Did you like that example of a future dance with the "silver people"?  What was with Len giving the ONLY 10 for Erin? Did you think Brook looked like she couldnt move in that dress that looked like water hoses were wrapped all around her?  And what was Vera Wang doing there?  Designing a wedding dress for one of these love-bird-dance-couples?